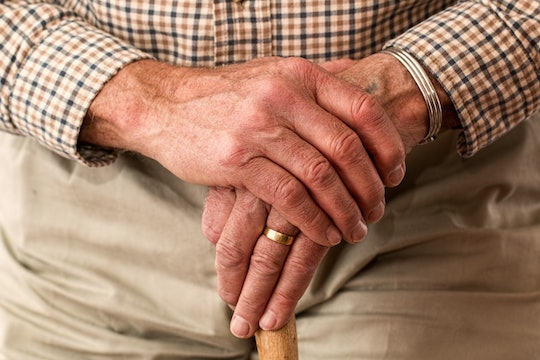 As a parent, choosing a guardian for your child or children in the event that you will no longer be able to care for them is a big deal. And depending on your family dynamic, it could also be a really hard decision to make. While outlining their wishes legally well in advance gives parents the chance to make sure that their kids are cared for by the specific person or people they choose, it's possible that an unforeseen accident or death could mean that grieving family members might be left to make the call on their own. Do grandparents have any legal rights to visit their grandchildren if they haven't been explicitly named as their guardian? It's a question that's largely affected by state laws — and it's also one that more and more grandparents are looking for answers to.

According to the American Grandparents Association, which provides resources for grandparents "physically removed from their grandchildren," state provisions pertaining to visitation statutes determine what rights, if any, grandparents are entitled to, and they vary from state to state. Perhaps more importantly though, state courts can still opt to apply those provisions differently depending on the case, since the well being of the child or children needs to be considered. Making things even more complicated is that some states have ruled the statutes providing grandparents with rights are actually unconstitutional. That's because granting grandparents legal rights can infringe upon the already-existing constitutional rights of the parents to raise their own children.

In the case that both of the child or children's parents are deceased, it's possible that the state might have already included a provision for the grandparents to allow legal visitation rights. In Alaska, for example, visitation rights must be determined in instances when both parents have died, and other states — including Colorado, Illinois, Indiana, Louisiana, Maine, Massachusetts, Mississippi, Missouri, Nevada, Ohio, Utah, and Vermont, among others — have similar provisions regarding the death of one or both parents, according to the American Grandparents Association. But other states, including Tennessee, Iowa, Florida, Alabama, and California have courts who have ruled that the provisions infringed upon the rights of parents, and in 2000, the United States Supreme Court decided in the case of Troxel v. Granville that grandparents' visitation rights were ultimately unconstitutional in the state of Washington.

What this means for the average grandparent though is that, in most cases, the rights that he or she may or may not be entitled to will depend on what a court determines. According to Colorado family lawyers Lewis & Matthews, in most cases, grandparents are entitled to see their grandchildren when their children allow it, and in the case of a divorce, grandparents can see the grandchild in accordance to their own child's visitation schedule (so, Grandma can visit when the kids are at Dad's every other week, for example). If one (or both) of the grandchild's parents die, the grandparents can then argue that it's in the child's best interest to still see his or her grandparents — and then the court decides.

Of course, there are countless other situations in which grandparents might be looking for guidance about their legal rights. They may be concerned about their ability to retain a relationship with their grandchildren after their child goes through a difficult divorce, or there may be other concerns, such as grandparents considering one or both parents to be unfit. In some cases, estrangements or difficult relationships with their own children could mean they aren't able to see their grandchildren as often as they'd like (or even at all).

In one Rhode Island court case back in September, grandmother Carolyn James testified that she was no longer able to see her 15-year-old granddaughter now that the girl is living with her father in Massachusetts, according to The Providence Journal. James also lost all contact with her 19-month-old granddaughter, who she had been raising, when the child was given back to her parents earlier in the year. James told the court,

Even without heartbreaking, complex family circumstances, grandparents may still want the reassurance of knowing they won't lose out on time with their grandchildren for whatever reason. When the relationship is healthy, the grandparent-grandchild bond can have many important benefits for everyone involved. According to Parenting, the intergenerational nature of the relationship between a child and his or her grandparent can provide the child with crucial emotional intelligence and social skills, providing them with trusted, non-parent role models to learn from who might do or think about things in a different way.

The benefits flow the other way, too: according to The Telegraph, grandparenthood offers a number of health benefits. An Australian study of post-menopausal women found that those who were involved in caring for their grandchildren regularly had a lower risk of Alzheimer's disease and related disorders, with those who visited their grandchildren at least once a week benefitting the most. And a separate study from the University of Virginia found that grandparents who routinely hugged their grandchildren had higher levels of oxytocin and lower levels of stress, which can help keep them healthy in their older years.

Grandparents who regularly spend time with their grandkids are also more likely to be physically active, according to Reader's Digest. And Orange Coast Memorial Medical Center's Dr. Kristine Arthur explained that it can have a big effect on their well-being:

Grandparents are more likely [than older adults without grandchildren] to get up, get dressed, walk somewhere, and be physically active. One of the biggest things I tell older adults is to not stop moving, even if it’s a small activity.

In a perfect world, all children would enjoy close-knit, loving relationships with their grandparents, and in the case of a traumatic event, like a death or even a really messy divorce, those relationships could be easily protected and maintained. But family relationship are complex, of course, and it's no surprise that the issue of grandparent rights is such a legal gray area.

For now, it seems that any grandparent looking for legal rights to their grandchildren has no choice but to hire a lawyer and go through the court process, hoping for the best. And given the many, many unique factors that can influence court decisions, it doesn't look like that will change anytime soon.