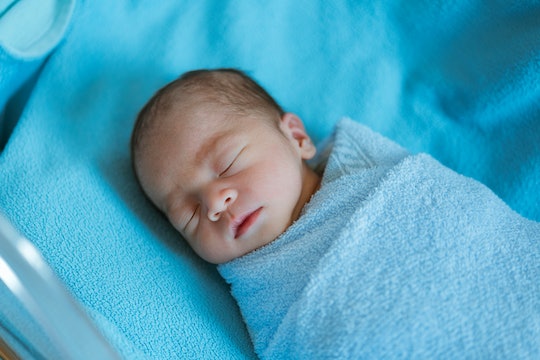 Everything You Need To Know When Deciding To Circumcise Your Son

When you're pregnant with a boy, you have to make a big decision about his body soon after he's born. In the months leading up to the delivery, you'll probably have one persistent question: do I have to circumcise my son? It's an important, and sometimes controversial, choice.

More Like This
9 Things Not To Say To A Pregnant Woman On Mother’s Day
Here's The Deal With Babies Who Sleep With Their Eyes Half Open
Lightning Crotch Can Actually Tell You These 7 Things About Your Pregnancy
Um, "Rusty Pipe Syndrome" Is A Thing, & Every Breastfeeding Mom Should Know About It

First things first: you don't have to circumcise your son. In fact, circumcision rates in the United States are on the decline. According to Mayo Clinic Proceedings, the percentage of circumcisions dropped from 83 percent in the 1960s to 77 percent in 2010. Additionally, the United States is kind of an outlier in its prevalence of circumcisions when compared to other nations in the world. As explained in The Washington Post, most Western European countries have a circumcision rate of less than 20 percent. When viewed in the context of the entire world, circumcision is not necessarily the norm for all nations.

Additionally, there are pros and cons to circumcising your son for health reasons. To briefly summarize, circumcision may provide your son with a decreased risk for urinary tract infections, sexually transmitted infections, and potential protection against penile cancer, as noted in WebMD. But, as further noted by WebMD, practicing good hygiene and using condoms may provide the same types of benefits. On the risk side of the equation, circumcision may result in foreskin that fails to heal properly, or even reattaches to the penis, as explained by the Mayo Clinic. For more personalized information, discuss this decision with your physician.

In addition to the health risks and benefits, there are a number of other factors parents often consider when making the circumcision decision. Cultural and religious norms may also factor in, as well as general worries about making the right call for your son. Will he get laughed at in the locker room if he's uncircumcised? Will he regret having a circumcision done at such a young age, and wish for an intact foreskin later in life? There are a lot of factors folded in to this seemingly simple choice. Whether you choose circumcision or not, this decision will have a serious impact on your son's life and is one that should be taken seriously.