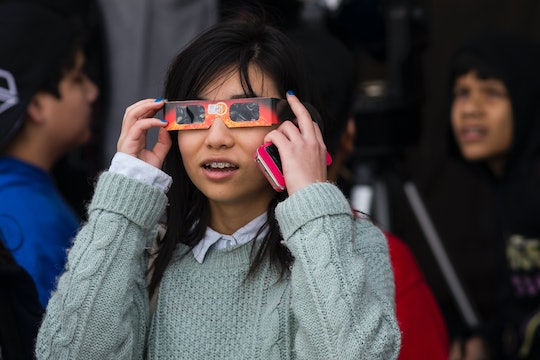 Do I Have To Wear Solar Eclipse Glasses? NASA Weighs In

In just a few weeks, the United States will get the rare experience to see a total eclipse of the sun. If you've ever seen one before, you know that it's extremely cool, and shouldn't be missed. But you may be wondering, do I have to wear solar eclipse glasses? Are those just for the kids? Are they actually that important?

Unfortunately, according to NASA, even those little glances (to the solar eclipse, not the girl from The Ring) can add up to some pretty damaging effects to your eyes and vision. The British Journal of Ophthalmology noted that it leads to a condition called solar retinopathy, which happens when the eye is exposed to the sun, causing bright light to flood and burn the retina. The damage is permanent, but very sneaky because it's painless, and cumulative. Meaning you don't feel the burn, and it gets worse with each exposure.

According to NASA, you definitely need solar eclipse glasses, but with a caveat. They must be rated to look directly at the sun, which is not printed on the package — they must be rated ISO 12312-2. That is the specific rating designated as safe by The American Astronomical Society. While it's not on the packaging, The American Astronomical Society has compiled a list of glasses that have been proven to meet the standards of safety.

An eclipse isn't something to be missed, but thankfully, the glasses are easy to find and very inexpensive. Enjoy this solar moment safely, everyone.

More Like This
Banana Boat Sunscreen Has Recalled Products That Were Found To Contain Benzene
9 Reasons Why Some Women Can't Breastfeed
Can You Have Sex With Placenta Previa? Experts Explain
Everything Parents Need To Know About Monkeypox