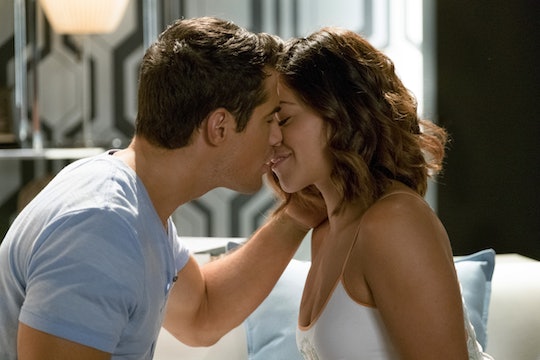 Things May Heat Up Between Jane & Fabian On 'JTV'

Though Jane the Virgin fans are still mourning the loss of Michael, Jane is ready to move on. Rogelio's new co-star Fabian has caught her eye and it turns out the feelings are mutual. So do Jane and Fabian hook up on Jane the Virgin? Though Jane ended the episode by telling Alba that she'd definitely be hooking up with Fabian, based on the promo for the next episode, it appears that won't be the case.

Jane's decision to abstain from premarital sex was the driving force of the show from the very begin. It's even a part of the show title. However, she's done that already and though she definitely doesn't regret waiting for marriage for her first time with Michael, she's no longer willing to do that again. Instead, she's more than willing to get together with Fabian. Unfortunately, he doesn't feel the same.

In the preview for next Monday's episode, Fabian reveals that he's actually saving himself until marriage. Talk about a plot twist! Just when Jane is ready to forgo her grandmother's Catholic rules, she finds a guy who actually wants to wait until marriage. What are the odds?

So what does that mean for Jane and Fabian? Jane wasn't looking for anything long term, she just wanted a fling. Obviously with Fabian's revelation, that's no longer going to happen, but is Jane really going to just end things with Fabian because he's making a choice she made for most of her life? It seems unlikely, but Fabian also doesn't seem like a long-term relationship kind of guy for Jane, but then again maybe he is.

Though Jane was obviously attracted to Fabian physically, Fabian didn't really realize he had feelings for Jane until he heard her speak about her book. Therefore he fell for her not just because she's attractive, but also because of her intellect, which is a great foundation for a relationship. Also, they both bonded over their writing. Granted, calling Fabian's memoir of Snaps an actual book is a bit of a stretch, it's still something they were able to share with each other.

Maybe even though Jane thought she only wanted a fling with Fabian, this could instead turn into something more serious. Knowing Jane, she'd feel too guilty breaking up with him just because he doesn't want to have sex yet and so she'll at least try to make it work. While doing that she may discover that she's not just attracted to Fabian, but she actually really likes him too.