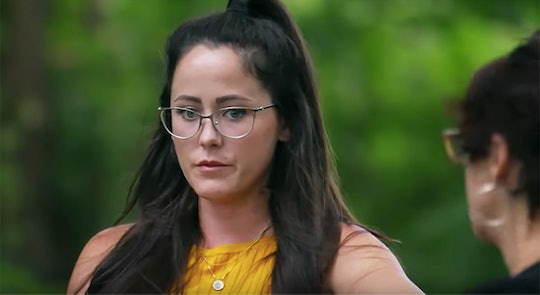 Teen Mom 2 star Jenelle Evans has a complicated relationship with Andrew Lewis, the father of her eldest son, Jace. Andrew hasn't been in the 9-year-old's life since he was a baby, which has put a major strain on his co-parenting relationship with Jenelle. But do Jenelle and Andrew at least talk? Jenelle is considering letting her ex back into Jace's life.

Longtime fans of the show might remember that Andrew left Jenelle and Jace to supposedly pursue a modeling career in China. The 33-year-old dad's gig probably didn't work out, however, because he's now living in New York City while holding down a "union job," according to Radar Online.

Oh, and did I mention Andrew supposedly graduated from the University of Southern California with a bachelor's degree? It's clear this guy has been busy since bidding farewell to Jenelle and Jace in sometime in 2010.

But after years of alleged silence, Andrew wants back in Jace's life. The problem? Andrew and Jenelle aren't on speaking terms, so she'll have to think long and hard before agreeing to visitation rights. Jenelle is arguably right to be cautious because Andrew supposedly contacted producers before he reached out to Jenelle.

“I have to tell you something,” Jenelle's producer, Kristen, told her during a recent TM2 episode, according to People. “Andrew has been getting in contact with me. He wants to see Jace.”

Jenelle, who was immediately suspicious of Andrew's intentions, told TooFab about the situation:

I was not surprised when I heard Andrew contacted our producers. He pops in/out of my life every couple of years, then disappears again. I feel like he did it for attention more than anything because he didn't contact me first.

Jenelle added that the last time she and Andrew spoke was through Facebook. "I have been in contact with Andrew here and there over Facebook a few years back," she told TooFab. "He couldn't write complete sentences and seemed drunk by how he was typing/talking."

Andrew, however, denies Jenelle's accusations. He told her mom, Barbara Evans, via FaceTime according to Radar Online: “I was drinking and doing all that stuff that I used to do in the past. I’m 33 years old now. The true low life in a relationship is a woman keeping her child away from a loving father!”

Barbara, who is cautious of the situation, didn't shoot down Andrew's request right away. “You’re hitting me out of the blue. I know in the past you’ve had a drinking problem," she told him, according to In Touch Weekly. "Maybe I can come to New York and meet you alone and make sure everything is okay and Jace is safe around you. Let’s make a plan.”

As for fans' opinions? Reactions are mixed.

"Honestly, no... I know what it is like to have a parent in an out of my life," someone tweeted whether they'd let Andrew see Jace. "It is hard for a child and I would never let that happen with my kids. When they become teens, they can decide what they want."

"Yes, but Andrew should come to him," someone else said. "Visits should start out supervised and slow to make sure all is kosher then eventually regular visits if all goes well. Who knows, Andrew might be more stable then they are."

I guess fans will have to wait and see how this one turns out. Either way, it's probably a good idea for to Jenelle and Andrew to open the door of communication. Talking is the best place to start.