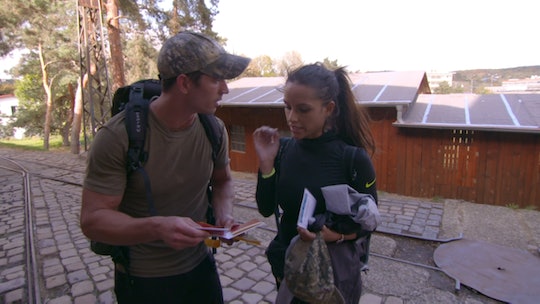 There are a lot of great duos on this season of The Amazing Race, but one fan favorite is certainly Jessica Graf and Cody Nickson. They first became well known on Big Brother 19 where they met and developed a showmance. Since then their showmance has turned into a real relationship and their level of teamwork and trust can be seen on The Amazing Race. Although the show is still airing, the race is actually over now, leaving many to wonder: do Jessica and Cody live together?

Prior to their time on Big Brother, Cody was living in Plano, Texas and working as a construction sales rep, while Jessica was living in Los Angeles, California and working as a VIP concierge. However, after finding love on the show, it appears the couple didn't want to be separated, so Cody made the move to Los Angeles to be with Jessica. On their new YouTube channel, "Living Jody," you can see them spending time together in their apartment, celebrating the holidays and unboxing the things they got to keep from Big Brother. Additionally, they also got a cute little dog together, who they named Bear. He even has his very own Instagram account that now has over 3,600 followers.

For now, living in L.A. works for them since both Cody and Jessica left their previous jobs after Big Brother and Jessica even had a brief role on The Bold and the Beautiful. Cody will also be joining Jessica in two more episodes of the soap opera on Feb. 27 and 28 as well. However, in a recent YouTube video the couple revealed they'll actually be moving to Dallas, Texas and maybe even buying a house together. The move makes sense considering that Cody's daughter, Paisley, probably still lives in Texas with her mom. It's totally understandable that Cody would want to live closer to his kid, and because they're in a committed relationship, it's not surprising that Jessica would make the move with him.

In the video, Jessica said they plan on moving in the spring so that's not too far away. The big move has also led many fans to believe that they may have won The Amazing Race, which includes a prize of $1 million. That money would certainly cover the cost of their move and even cover buying themselves a new place. However, fans will just have to keep watching this season to see if Jessica and Cody do make it all the way to the end, though it wouldn't be surprising if they did.

Although they fell out of the top five last week, they still weren't at the total bottom and were never in jeopardy of being eliminated. As many fans of Big Brother saw, Jessica and Cody do make a formidable team and they work incredibly well together. Between their strategizing and physical strength they're definitely top contenders. But do they really have what it takes to win it all? Their fans certainly hope so. They're also hoping a marriage proposal could be in the couple's future soon.

On last week's episode of The Amazing Race, a different duo actually got engaged. Lucas Bocanegra popped the question to his longtime girlfriend, Brittany Austin, after they came in first place and won a trip to their dream honeymoon spot in Bali. With so much love in the air, it's not surprising that many fans are hoping by the end of this season Jessica and Cody will be engaged as well.

For now though, it's great to see these two still going strong. While not every showmance from Big Brother lasts, it looks like Jessica and Cody are in it for the long haul. Make sure to keep watching The Amazing Race to see how well they do.