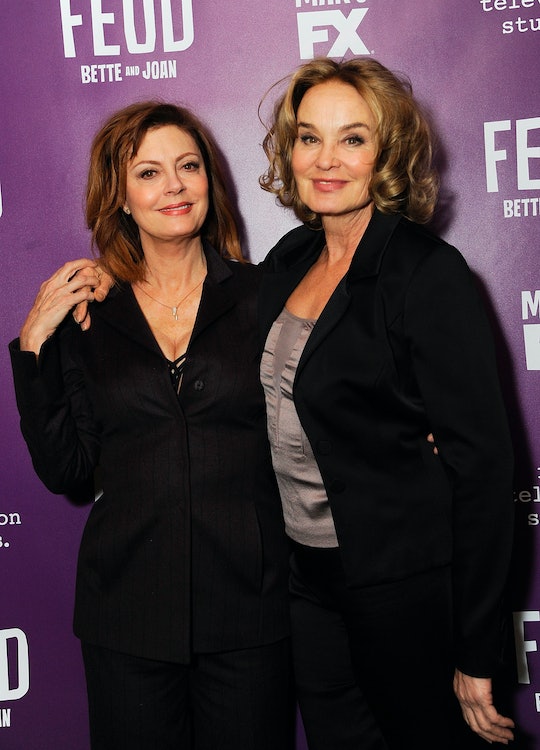 One of the most anticipated shows of 2017 is Feud, the latest anthology series from anthology-king Ryan Murphy. The show is set up to follow one legendary "feud" per season, with the first batch of episodes focusing on the rivalry between two Hollywood actresses of yesteryear, Joan Crawford and Bette Davis, during the filming of their movie What Ever Happened To Baby Jane? Ahead of the season's premiere, many are wondering what the relationship is between the two lead actresses portraying the roles of these known enemies. So do Feud's Jessica Lange and Susan Sarandon get along in real life?

The animosity between Crawford and Davis, two actresses who were massively popular and successful in the 1930s, was legendary in Hollywood and among other actors of their day. In particular, the tension surrounding the filming of their 1962 psychological thriller What Ever Happened To Baby Jane? is the stuff of celebrity legend. Fittingly, Murphy chose two well-esteemed, older actresses to portray the two women who were at each other's throats at a time when roles for aging actresses were even harder to come by than they are now. And, reminder — those roles are still few and far between, even over 50 years later.

But do Sarandon and Lange, two of the most highly-regarded and enduring actresses of their generation, echo any of the rivalry found in the tense relationship between Davis and Crawford? The clips, teasers, and trailers released in advance of the show's premiere certainly make their portrayal of the hatred the two stars had for one another very convincing.

As far as anyone can tell, the two women like one another just fine — though at some point, Sarandon did tell Vanity Fair that she was "kinda scared" to play Davis opposite Lange's Crawford, back in 2016 before filming commenced. In all likelihood, though, that was about the subject matter, and not a hesitation on Sarandon's part to work with the former American Horror Story star.

Instead, it's most likely that the two actresses' convincing performances as rivals are just the product of their incredible acting abilities. As has been discussed in pre-release reviews of the show, the full-season length of the story manages to allow a deep dive into both women's perspectives in the feud, illuminating the rivalry beyond the surface-level cattiness and camp that it's been treated with in the past and humanizing both Davis and Crawford.

In an interview about the show, the actresses illuminated how the media played a hand in amping up the legendary feud. "There’s still that old thing in the press of 'Oh, they hate each other — when we never actually work with each other,'" Catherine Zeta-Jones, who stars as Olivia De Havilland in Feud, told Variety. Sarandon also addressed the history between herself and Lange, prior to filming the show, telling Variety in the same interview that the two have "known each other for a long time, but [have] never had the opportunity to work together, because they just don’t put two [women] in a movie."

Sadly, that quote just proves how much the circumstances that led to the Davis/Crawford rivalry exist just as much today as they ever did then.