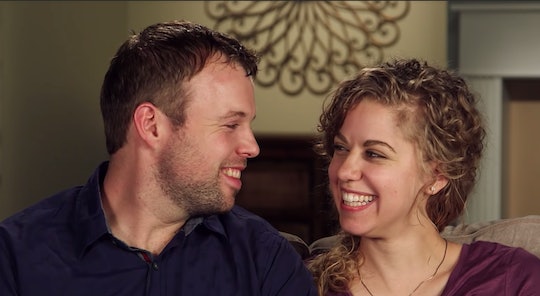 Do John David & Abbie Duggar Want Kids? Their Future Plans Are Up In The Air

Those who are familiar with Michelle and Jim Bob Duggar and their 19 children know this ultra-conservative family has a unique way of doing things when it comes to relationships. Once teenagers or young adults enter into a courtship, it's usually a matter of months before they become engaged. During this time, there is limited physical contact — meaning no kissing, no frontal hugging, definitely no sex, and chaperones at all times. Typically, the engagement period lasts a few more months — just long enough for the couple to plan a wedding — before they're walking down the aisle. Then it's just a matter of time before children come into the picture. But do John David and Abbie Duggar want kids?

If you've been following along with John David and Abbie's whirlwind romance on TLC's Counting On, then they already seem to be following a familiar timeline. Well, aside from the fact that John David was in his late 20 before entering into a relationship instead of late teens/early 20s. The couple announced their courtship in June 2018, according to Us Weekly. “Abbie and I are just so excited, we’ve known of each other for several years,” John David said in a statement posted on the family's website. “We fell in love very quickly and it’s been a wonderful journey thus far." Abbie added, “John flew in for a church event here in Oklahoma where I’m from. We really got connected then.”

This sweet couple turned around and revealed their engagement just a month later, according to People, and then tied the knot in November.

Now, this could just be excited parents jumping the gun. But Michelle Duggar's post-wedding message to the newlyweds hinted that John David and Abbie might be planning to start a family in the near future, according to In Touch Weekly. “We are just so excited, John and Abbie,” Michelle says in the video. “We’re just really thrilled that you guys are gonna be near us and we’ll get to see you all often and look forward to those grand-babies coming! Maybe some more granddaughters? You never know!”

Then again, perhaps John David and Abbie have other plans in store. Before they met and married, Abbie was actually working as a licensed nurse. "I left my job a couple of months ago so that I could plan for the wedding," she explained during an episode of Counting On. "And then we're going to move to Arkansas to make our home." When a producer asked Abbie if she hopes to go back into nursing one day, she replied, "I do hope to go back to nursing one day, especially so I can keep up my license and my skills."

So who knows? Maybe Abbie will get licensed in Arkansas, start working as a nurse again — and hold off for a bit in the baby area. Or, she could do both: Be a mom and a nurse. People do it every day, after all. Although it would certainly be an anomaly in the Duggar family, considering none of the married daughters/wives work outside of the home. (Except maybe Jill Dillard, who had studied to be a midwife. But it isn't clear if she gets paid to do so, or just volunteers.)

When it comes down to it, it isn't clear whether John David and Abbie Duggar plan on starting a family — considering they haven't directly addressed the topic. It seems John's family is assuming that's what they're planning. But maybe John and Abbie have talked openly about wanting kids off screen.

I guess Counting On fans will just have to watch and see whether this couple decides to start a family. Either way, they're super sweet — and totally in love.