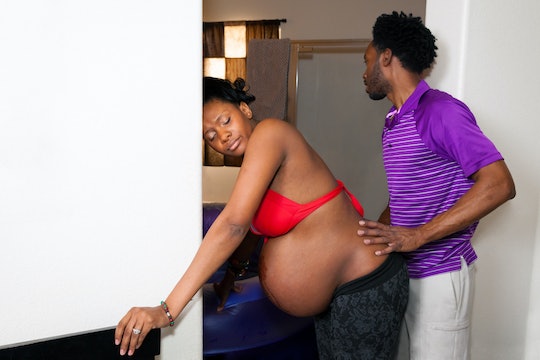 Do Kegels Help With Contractions?

I don't want to scare anyone, but I'd like to go on record as saying that childbirth was much more difficult than I thought it would be. I've always considered myself a very calm person with a decent pain tolerance, but that went out the window when my contractions began. If there's one thing I could go back and change, it would be to listen when my Lamaze coach told me to do Kegels. At the time, I didn't know if Kegels could help with contractions? But my coach was an advocate and, as it turns out, the evidence backs her up.

So what exactly are Kegels? According to the Mayo Clinic, Kegels exercises are pelvic floor muscle training. Prevention noted that to do Kegels properly you simply begin to pee and then mid-way through stop and hold it in. The muscles you use to clench are your pelvic floor muscles. So find the muscles, squeeze for up to 10 seconds, and — voilà— you've successfully done your first Kegel exercise.

Having greater control of your pelvic floor muscles can make it easier to push your baby out when contractions hit, according to the American Pregnancy Association (APA). Not only that, but the APA noted that women who did Kegels also reported having an easier labor. And there's yet another amazing potential benefit as well. A study in the British Medical Journal noted that Kegels can make labor shorter for some women. I was in labor for about 12 hours — pushing for about two and a half of those — and believe me when I say I would have done pretty much anything to shorten that up.

If you're hoping Kegels can help you handle your contractions and get through labor, you can easily work them into your routine. Fit Pregnancy suggested doing 20 reps of Kegels for ten seconds each, five times a day. They're so simple and discrete you can do them pretty much anywhere.

There are benefits beyond labor as well. Pregnancy and delivery do a number on your bladder control, which you may notice if you sneeze or laugh too hard and feel a trickle of pee. Everyday Health noted that Kegels can help with incontinence, but you need to do them regularly for at least four to eight weeks before you'll results.