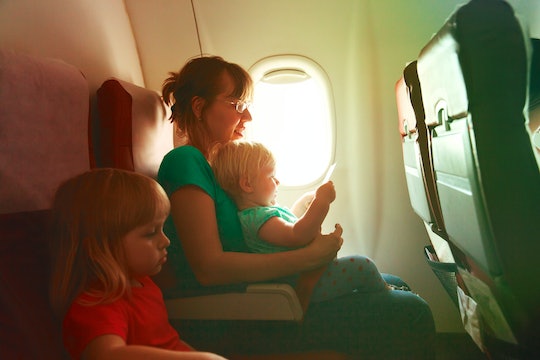 Kids Can Fly For Free Up To This Age, So Book That Trip ASAP

Traveling with little kids can be a dicey (and pricey) decision. Even if you manage to get off the plane without your baby having a major meltdown, you might have one when you see your credit card statement from the trip. I'm currently trying to book tickets for my family to fly to Germany and while I know I'll have to pony up for my 3-year-old's seat, I'm really hoping that my 20-month-old can still score a free "lap infant" spot. But do kids fly for free, both domestically and abroad? After all, they're smaller than most carry-ons, right?

There's a lot to factor in — the age of your child, the airline you're flying, and where you're going. But, the general rule of thumb is that kids under the age of 2 fly free on most major airlines (for domestic flights), as long as they ride in your lap, according to USA Today, which noted that there still may be ticketing fees and taxes applied.

However, if you're flying internationally with a child under 2 (like I am, perhaps foolishly, about to do), you're likely going to be paying a fee. "Internationally, lap infant tickets will usually cost 10 [percent] of an adult fare," explained Summer Hull, founder of the family award travel blog Mommy Points, in an interview with the Los Angeles Times.

But what about children older than 2? Do you really need to pay for a full-priced seat for a toddler who just misses the age cut-off? The answer is generally, frustratingly, yes. "Children older than 2 will typically be charged full fare, regardless of age. Luckily, some airlines occasionally offer kids fly free promos," explained Family Vacation Critic.

Yet, there are some airlines that seem to get that the struggle is real. Southwest airline offers an infant fare, which is a discounted price for the infant to have their own seat, according to the Southwest website. That's invaluable if you're traveling with a baby in a car seat or have a squirmy toddler that would never stay in your lap for a long flight. Southwest also offers something called a 'Child Fare,' which is a discounted ticket for kids between the ages of 2 and 11, according to the airline's website, which notes that you must book an infant or child fare over the phone.

Quite a few airlines, including American, Delta, United, JetBlue, Southwest, Virgin and Alaska, also offer free stroller and car seat checks, so at least you don't have to pay extra for all the kid gear you'll be rolling with, according to The Points Guy. From my experience, I've also had airlines graciously check our pack-and-play for free.

Running the numbers, it can seem like traveling with a young baby is actually the smartest time to fly — that is, if you're up for the logistical and emotional challenges that come with it! Sure, you have to pack an overflowing diaper bag, the car seat, the stroller, the pack-n-play and countless wardrobe changes, but the discounted, or free ticket, might make all that hassle worth it!