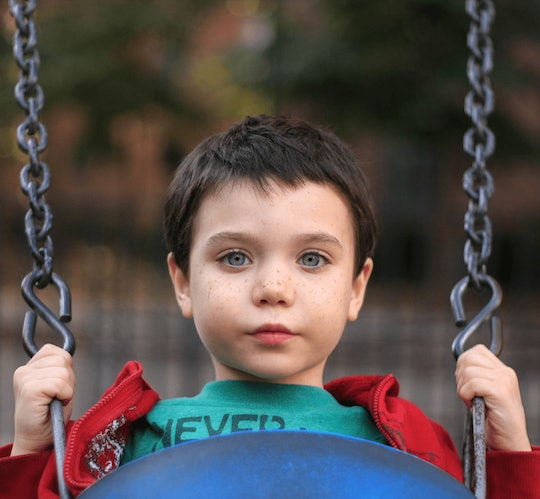 Do Kids In The US Need More Recess? Yes, They Desperately Do

A video released Tuesday by attn: — a social impact company whose mission is to "inform and empower the next generation" — has American parents talking and wondering if kids in the U.S. need more recess. The minute-long "Recess Around the World" video has been gaining traction online since it was first posted, comparing recess in Europe to recess in America. The video shares some startling statistics about children in the U.S. and how little time they spend outdoors. For example, 40 percent of schools have reduced or eliminated outdoor recess for children, and, according to a University of Michigan study, children spend only seven minutes a day outside.

The importance of outside playtime is about more than just a means for children to have fun and work out their energy: Access to outdoor play can have lifelong developmental, mental, and educational impacts on a child. A 2010 White House Task Force action plan outlined six ways outdoor play can help fight the childhood obesity epidemic. A 2011 study concluded that children with ADHD experience milder symptoms when they regularly play outdoors, especially in green spaces like parks and fields. In 2015, Chinese researchers suggested that children who play outside 40 minutes a day are less likely to develop myopia, commonly known as nearsightedness.

Our Unnatural Avoidance Of Nature

By reducing children's exposure to nature and the outdoors, adults are subliminally teaching children that there must be something wrong with or to be feared about nature — kid logic dictates that if there was nothing to fear, people would spend more time outside, right? This isn't about helicopter parenting or free-range kids — this form of literal sheltering is robbing children of tremendously beneficial experiences, learning opportunities, and developmental advantages.

Richard Louv's highly-acclaimed book on the subject, Last Child in the Woods, further expands on the notion that we're inadvertently teaching children that nature is the Bogeyman:

Our society is teaching young people to avoid direct experience in nature. That lesson is delivered in schools, families, even organizations devoted to the outdoors, and codified into the legal and regulatory structures of many of our communities. Our institutions, urban/suburban design, and cultural attitudes unconsciously associate nature with doom—while disassociating the outdoors from joy and solitude. Wellmeaning public-school systems, media, and parents are effectively scaring children straight out of the woods and fields.

Reconnecting Our Kids With Nature

It's not just about letting the sunshine in — the Children and Nature Movement that Louv's book has inspired is about letting the kids out. The author's website offers several nature activity resources for kids and families, including the brilliant suggestion that families adopt a daily "green hour" — giving children time for unstructured exploration, play, and interaction with their natural world.

As schools chip away at more and more time from kid's well-deserved and much-needed recess time, it's up to parents to take the literal lead by taking their children outside. You don't have to pack up the Winnebago and spend a week at Yellowstone, but even just spending a few minutes outside on a daily basis will do wonders for your child's wellbeing.