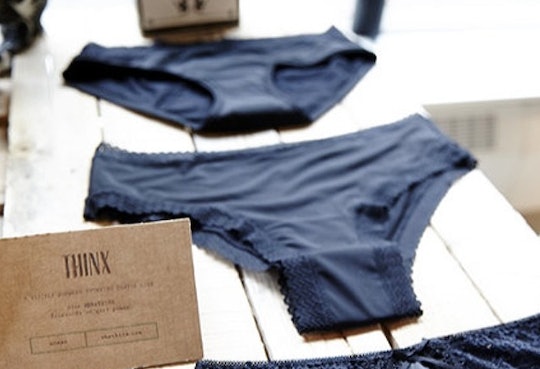 Do Leak-Proof Period Panties Really Work? I Found Out

Lots of people think the idea of just bleeding into your underwear all day is gross or uncomfortable. Our society is not super friendly to seeing period stains on your jeans. I think most people who menstruate have one (or several) pairs of ugly underwear we only wear when Aunt Flo is in town, so when leaks happen (as they always do), your cute underwear doesn't get ruined. That's where THINX period panties come in. These babies are made to look cute and keep your clothes safe from nasty period stains all at the same time. Since they became recently popular I wondered what it was like to try Period Panties for my postpartum periods. For some women, they've noted that their postpartum periods are much heavier than their pre-baby flow, so I was curious to see what would happen with my own body.

I got my first period when I was 11. I wasn't terribly environmentally conscious at that point, even though pads were horribly uncomfortable. Still, they didn't seem bad compared to the crazy pad-holding garter belt contraptions my mom's generation had to put up with. I started using tampons when I was 14, and I remember being struck right away by just how much garbage was involved. I remember thinking that there should be two options when purchasing tampons: a box for beginners, and a box for people who already knew what the hell they were doing and didn't need a giant, paper-wasting instruction foldout.

When I was in my 20s, I stared using a Diva Cup. I loved it, and I found the menstrual cup easy to use. I also love emptying my period blood into my houseplants (seriously! It's great fertilizer.), but what I've loved the most when I menstruate, and what I've always loved the most, is free bleeding. I hesitate to actually use that term, considering it was coined by meninists on 4chan. But I've been free bleeding (and wrecking countless pairs of underwear and sheet sets in the process) pretty much since I first got my period all those years ago.

My personal preference has always been to menstruate uninhibited, although if I'm going to work or school or something like that, I do wear my Diva Cup. But for bed time and around the house, I always free bleed. It just feels good! The downside is that since I was 11, most of my sheets and underwear have had giant period stains in them. Also, sometimes your period just sneaks up on you, so the idea of period absorbent panties that are actually as cute as they are functional was definitely intriguing to me from the start. And with a postpartum period, I didn't exactly know what to expect. Enter THINX.

According to their website, THINX Period Panties are a four-part system: they wick moisture away from your body to keep you dry, they kill bacteria, they're absorbent and can hold up to two tampons worth of liquid, and they're leak-resistant, keeping even your "whitest white pants" safe from staining.

The undies run $24-$38, depending on the style. I think that's pretty reasonable, especially if you were able to completely replace your need for pads and tampons (again, not what they're promising, but I can dream). THINX also offers price breaks so you can build a cycle set.

They're not meant to replace tampons/Diva Cups/other forms of protection, but for the sake of science, I went all-in and wore them for all four days of my period (yep! short cycle-haver over here), without anything else to hold back Aunt Flo's mighty tirade.

I'm newly not-breastfeeding, so I've had a couple of episodes of spotting in the year since my daughter was born, but no actual period. Before getting pregnant, my periods were extremely light. Like, maybe fill half a Diva Cup on the first day light. I wasn't sure what to expect with my first post-baby period, and oh boy, I was in for it.

On my first day wearing my pair of THINX panties I had to work, and my flow was extremely heavy. As I mentioned, I only had the one pair to try, and they were supposed to absorb about two tampons worth of blood. I didn't feel uncomfortable in the slightest until about four hours into my shift, when I started to feel a little wetness. I'm sure there was more than two tampons worth of blood in those panties at that point, and they still hadn't leaked one bit. I took them off when I went home for my lunch break, rinsed them out in the sink, and hung them up to dry. Cleaning them by hand wasn't gross at all; they can go in the washing machine, but I chose to hand wash them to try and make them last that much longer. I just ran them through with cold water and squeezed until the water ran clear. I had to use my Diva Cup for the rest of my day at work, which is why it would be great to have multiple pairs of these things.

One thing I noticed is that THINX might fit a bit small. It's hard to know when I'm just one person with just one pair, but my Thinx were the tiniest bit snug on me.

Normally by day two, my period is basically over and the last two days are just super light spotting. I actually put the THINX panties back on after work on day one and wore them overnight. My flow was still extremely heavy. But the Panties are pretty amazing at wicking moisture away from your skin. They're comfortable until they're absolutely soaked. Unfortunately, the sensation of the underwear being "full" actually woke me up in the night. I got up, took them off, threw them in the sink, and went back to bed commando. So of course I wound up with more blood stains on my sheets. On heavy days, I think I'd nix the Panties for overnight. Even if I had another pair to put on, I'm not sure I'd want to have to go through the hassle of waking up in the night to change underwear.

I'm not much of a cute underwear person. I wear cotton boy shorts and no bra pretty much 100 percent of the time, so in a way, this pair of THINX panties are the fanciest underwear I own. There aren't too many options in terms of style, but I suspect that will changed as the brand grows. They're definitely not your standard granny-panty style underwear at all. In fact, I think they're quite cute and stylish.

Things were finally starting to lighten up a bit on day three. (I know I'm lucky.) I really loved being able to get up in the morning, throw on my underwear, and not have to worry about putting in my menstrual cup. I don't know, maybe other people are better at it than I am, but I've been using a menstrual cup for four years and it still takes me a solid couple of minutes to put it in properly. With the period panties, I could just throw them on and boom! done.

I still didn't quite make it through the day with my one pair, but I did make it until the end of the work day without leaks or discomfort, which was great.

My period was quite light by day four, which is definitely where the THINX really shine. I got through the whole day with them on without feeling any wetness or discomfort, and without any leaking. There's no way I would bother using a menstrual cup when my period is this light, so the panties were great.

I also kept them on overnight, so basically, I wore them for 24 hours straight. Which I would argue is pretty standard for a normal pair of undies. They protected my sheets from staining, and they kept me dry and comfy all night long.

I freaking love these things, and I'm going to buy myself enough for a whole cycle. They are incredibly absorbent, they're comfortable, and they're cute. They're also great for busy women. Though they definitely don't replace other forms of protection, they don't claim to. I'd still wear my menstrual cup along with them on heavier days if I was going to work or out in public. But for around the house and lighter days, they definitely save time, and save sheets.

I'm not sure how I feel about the whole "anti-bacterial" thing; seems to feed a bit into the idea that period blood is gross or dirty, which it isn't! I chose to try the most-absorbent option, which come in a hip hugger style with cute lace detailing. They're also available in black or "nude," although the nude color here seems to only apply to people with pale skin.

In November 2015, THINX launched a line of period underwear for transgender men. In a blog post on the company's website, the THINX team wrote, "Over the past few months, we have received countless messages from the transgender community. We have received gentle reminders that women aren’t the only ones with periods ('she' isn’t the only one who 'THINX,' if you will). These testimonials express the overwhelming challenges that come with gender dysphoria as a result of menstruation. We often forget that in the case of a female to male transition, periods don’t stop coming every month. For the trans* community, the cycle isn’t just a petty inconvenience as it is for so many of us, but rather a frequent, discomforting reminder of an ongoing battle." And I think these panties are honestly great for trans men or non-binary people who menstruate and who might suffer from dysphoria from using pads or tampons. The heavy style, especially, isn't super feminine at all. And the new line is "gender neutral."

All in all, these panties save you time, save the earth, and, in the long run, they'll save you money, too. All together, I'd say that adds up to a win.

More Like This
Fun, Sexy Maternity Lingerie, For When The Mood Strikes
75 “Would You Rather” Questions For Couples, Ranging From Sweet To Sexy
15 Super Cute Valentine’s Day Pajamas
These 15 Last Minute Valentine’s Day Gifts Are Total Winners
What Parents Are Talking About — Delivered Straight To Your Inbox