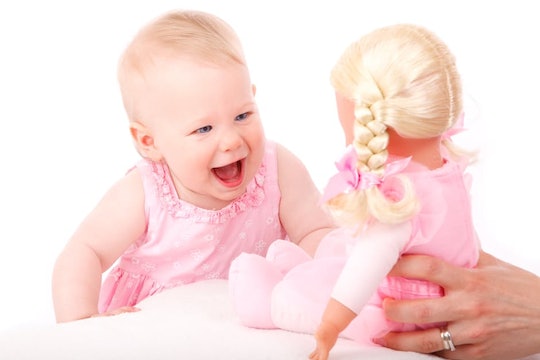 It’s become much more common in modern day American parenting to not force any preconceived gender norms onto a child, such as dressing a little girl in a yellow outfit instead of a pink dress one or giving a little boy something else to play with other than a toy firetruck. There are a lot of advantages to this type of parenting style because it supports gender equality and it gives children an outlet to dictate their own personalities and characteristics before societal norms do. But, a new study claims that there may be scientific evidence behind some of these stereotypical preferences — like gender-categorized toys — and that there’s a actually a biological reason that explains why little girls prefer playing with dolls and little boys prefer playing with toys like race cars and building blocks.

According to a Los Angeles Times column published on Jan. 6, Debra Soh — a sex writer and sexual neuroscientist at York University in Toronto — wrote that the “scientific reality is that it’s futile to treat children as blank slates with no predetermined characteristics.” Why? Because “biology matters” and these preferences “are innate, not socially constructed or shaped by parental feedback,” Soh argued in the Los Angeles Times column.

Every child is different and will develop in his or her own unique way, but Soh wrote that most girls tend to gravitate towards toy like dolls because they are “socially interesting” and help their “social and verbal abilities develop.” Meanwhile, Soh argued that boys prefer toys like cars and trucks because they are “mechanically interesting” and foster their “visuo-spatial skills.”

As Soh pointed out, a recent study — published in journal of Infant and Child Development in May 2016 — infants first demonstrate these toy preferences very early in development, typically between 18 and 23 months old. The researchers came to this conclusion after observing more than 100 children — girls and boys between the ages of 9 and 32 months old — play with a variety of gender-typed toys without the presence of a parent.

This is isn’t the only study that suggests these observational findings. In fact, as Soh also cited, research from a Proceedings of the National Academies of Science paper published last year — which initially claimed that the brains of women and men are identical, suggesting that these stereotypical sexed differences are learned, not innate — found that these preferences are linked to brain functions as “brain features correctly predicted subjects’ sex about 69–77% of the time.”

This research suggests that not every gender norm is artificially determined, rather some are simply biological because male and female brains are constructed differently and therefore develop to prefer different things.

Soh’s column, supported by recent research, is certainly interesting from a scientific and societal standpoint, but it doesn’t mean that little girls have to play with dolls and little boys have to play with Legos. It simply suggests the idea that biological influences exist and some of those innate preferences may choose one toy over another.

Regardless, if kids are happy and their minds are being stimulated by a variety of toys, it shouldn’t matter too much which one they choose.