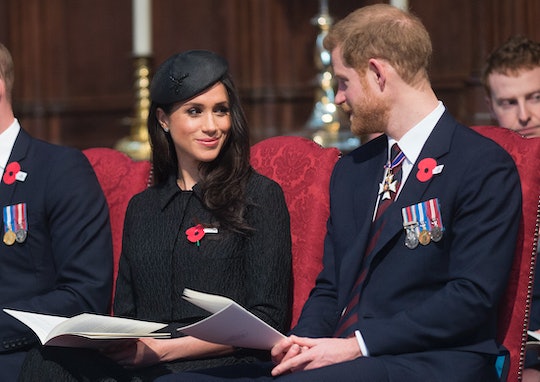 For many engaged couples, it's considered good luck to keep the groom from seeing his bride before the ceremony on the day of the wedding. But plenty of modern couples have done away with this belief. So will Meghan Markle and Prince Harry get ready separately on their wedding day? The royal family is pretty staunch about keeping traditions, after all, but Meghan and Harry definitely put their own spin on the aspects of the upcoming ceremony.

It looks like the pair will spend the evening before their wedding day apart. "On the night before their wedding, Prince Harry and Ms. Meghan Markle will stay at separate hotels in the Windsor area," read a statement from Kensington Palace, according to Access. But these are hardly some average roadside hotels. They are about as luxurious as any accommodations can get.

As anyone might expect, the Cliveden House is a stunning venue with a rich history. Designed by Sir Charles Barry, the man behind the Palace of Westminster, the current house at Cliveden was erected in the 1850s, according to the National Trust's official site. Plenty of social luminaries have visited Cliveden over the years, including Winston Churchill, Henry Ford, and even Ghandi. In addition, Nancy and Waldorf Astor lived at the house for some time. The site has been home to some famous controversies and scandals as well, particularly the Profumo affair of the '60s, as further noted by the National Trust. In other words, it's a storied place to stay the night before making history by marrying into the royal family.

But it isn't like Prince Harry is going to stay in some shabby motel. Joined by his brother Prince William, Prince Harry will stay at Coworth Park on the night before his wedding, as explained in People. Owned by the Dorchester Collection, a luxury hotel operator, the five-star hotel is located near Windsor Castle, and it's magnificent; definitely a hotel fit for a prince.

Located on 240 acres of parkland just outside London, Coworth Park is home to several hotel rooms with a modern design, as noted on the hotel's website. Plus, the amenities are amazing. For instance, guests can request a car valet or even a butler to help out with their stay — it's a little more intense than the average room service list, that's for sure, but nothing that the royal family isn't used to.

It looks like both Prince Harry and Meghan Markle will be in great hands the day before and morning of the royal wedding festivities. After all, they will definitely need their rest for the royal wedding, when all the world's attention will be on them.

More Like This
Meghan & Harry Celebrated Their Anniversary As A Family Of Four For The First Time
Prince Harry & Meghan Markle Could Take Us Inside Their Home For A New Docuseries
It's Not Just Covid: Doctors On Why Everyone's Getting Sick Right Now
Here’s What You Need To Know About That Viral 1960s Baby Formula “Recipe”