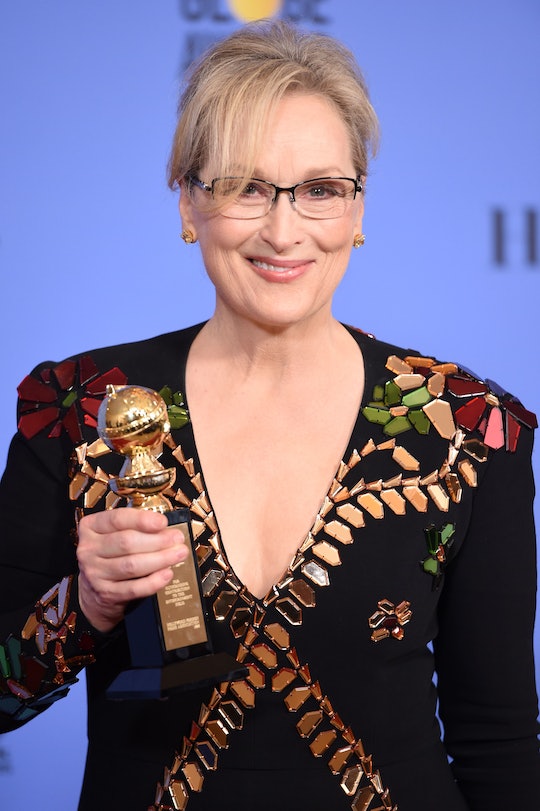 After Meryl Streep criticized Donald Trump at the Golden Globes on Sunday night for allegedly mocking a disabled reporter and for Trump's controversial policy plans, the president-elect responded in a three-tweet-long rant, calling the Oscar-winning actress “over-rated” and writing that she “doesn’t know me.” But, in the hours after the impassioned speech aired, the keen eyes of social media did what they do best and dug up some old photos that may prove that this latest declaration from Trump, like so many others, may not entirely be true. Despite the 70-year-old real estate mogul and incoming president's claims, many may be left wondering if Meryl Streep and Donald Trump know each other because photos taken decades ago and unearthed interviews sure make it seem like they do. Romper reached out to Trump’s team for comment on the claim and is awaiting a response.

In fact, less than a year and a half ago, Trump praised Streep — who has been nominated for 30 Golden Globe awards and 19 Academy Awards throughout her four-decades-long career — in an interview with The Hollywood Reporter from August 2015 unearthed by Us Weekly. When the magazine asked Trump if he was a fan of any particular actresses, Trump responded that “Meryl Streep is excellent” and added that “she’s a fine person, too.”

“The problem is I’ll name three or four or five [actresses] and then the hundred that I know will be insulted, and I don’t mean to insult them,” Trump continued in the 2015 interview.

But, in the wake of Streep's speech, even after praising her character and talent less than a year ago, Trump fired off a trio of tweets, changing his once-sweet tune:

While they may not be friendly right now, it's not unfathomable that Streep and Trump may have crossed paths once or twice in their lives. Both of their names have been easily recognizable for years and at that level of fame, it’s probably not uncommon that their circles would intertwine at some point.

But, they do they actually know each other? Perhaps Trump was simply once a fan of one of the greatest actresses in the business or maybe they've met in the past and that's why the president-elect commented on her "fine" character. It's not clear, but this photo shared on social media of Streep and Trump on the film set of Falling In Love from 1984 has many wondering what sort of cordial relationship (or otherwise) the two actually might share.

It's not clear why Trump would claim that he and Streep don't know each other. Considering the age of the internet, almost anything and everything can be unearthed, and will most certainly be, especially during such a pivotal and politically tense time. It's possible that more photos could still be unearthed.

If we've learned anything, it's that nearly everyone is a fan of Streep. And given what we know now, its likely Trump, for all his angry tweeting, is (or was) a fan as well.