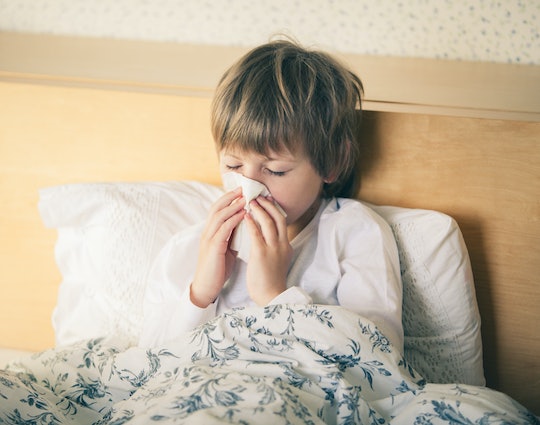 More Kids Today Have Food Allergies Than Previous Generations, & Here's Why That Might Be

It's not uncommon to know or have a kid who has a food allergy. After all, statistics show that as many as 6 million — or 1 in 13 — children in the United States lives with one or multiple food allergies. But how has that number changed over the years? Do more kids today have food allergies than previous generations? The answer may not be surprising to many parents, but it still points to a trend that has public health officials concerned.

In 2013, the U.S. Centers for Disease Control and Prevention released data that showed a nearly 50 percent increase in food allergies among children between 1997 and 2011, according to TODAY. Specifically, the prevalence of childhood food allergies jumped from 3.4 percent to 5.1 percent over that 14-year period, according to CDC data.

What's more: Food Allergy Research & Education reported that peanut and tree nut allergies more than tripled between 1997 and 2008. Peanuts, by the way, are one of the top 10 foods that cause 90 percent of all allergic reactions in people under 18 years old, according to KidsHealth. And many of these allergies may be severe, and could lead to life-threatening anaphylactic shock.

What's causing this uptick in food allergies? A Northwestern University animal study published last week found that an accumulation of factors affecting a child's immune system could lead to food allergies, according to TODAY. Those could include genetics, environmental exposures including contact with dust mites or mold, and diversity of foods in your diet, among other possible factors, the study's findings showed.

Lead study author Joan Cook-Mills, a professor of allergy-immunology at Northwestern, told TODAY that this combo of factors found in the mice they studied were "a recipe for developing food allergy."

But children aren't the only ones experiencing an uptick in food allergies. More and more adults are becoming allergic to grub that never used to bother them before. Research published last year by FAIR Health found that private insurance claims for diagnoses related to anaphylaxis caused by food shot up 377 percent from 2007 to 2016, according to NBC News. Of the adults who filed claims, half of them developed food allergies after 18 years old.

We are seeing more adults that have food allergy come into our practice and we're often seeing more severe reactions occurring, adults that needed to go to the emergency room for their reaction, a true anaphylaxis.

Hemler added, according to NBC News,

It can be very scary because there’s nothing you can do to predict whether you’re going to have a food allergic reaction.

Nor what food will cause that reaction. The FAIR Health data found that peanuts accounted for 26 percent of the claims, while tree nuts and seeds made up 18 percent, respectively, according to NBC News. But the most common cause, the research showed, is actually unknown.

"Other specific foods" represented 33 percent of the insurance claims, according to NBC News — a category that jumped 71 percent in that nine-year period. That means more and more adults are having severe allergic reactions to foods that remain a mystery.

So how do you prevent food allergies from sneaking up on you or your kid? Doctors recommend diversifying your and your kid's diet. A 2016 New England Journal of Medicine study found that consistently feeding your infant potential allergens, such as wheat or eggs, could lower their food allergy risk by two-thirds.

As someone with multiple food allergies, I can attest to how annoying and frightening they can be. Although different factors determine whether a kid develops a food allergy, it's still important to try to prevent — and protect against — severe allergic reactions in any way you can.

More Like This
Banana Boat Sunscreen Has Recalled Products That Were Found To Contain Benzene
New York Can End Religious Exemptions to Vaccine Mandates, Says A Federal Appeals Court
Can You Have Sex With Placenta Previa? Experts Explain
Everything Parents Need To Know About Monkeypox