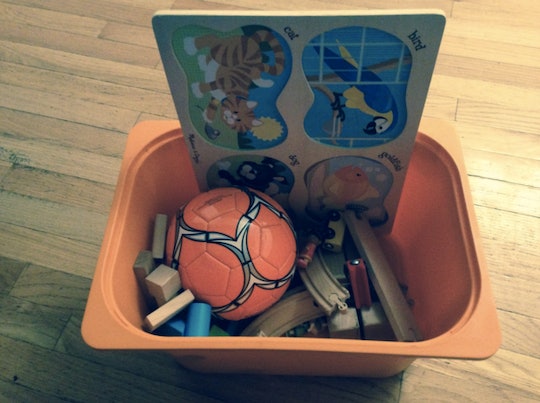 Do My Toddlers Have Too Many Toys? I Gave Mine Just 5 To Play With, & Here's What Happened

Finally having kids after going 10 rounds with infertility can make it easy to spoil your offspring. Because I wanted to become a mom so badly, when my kids snuggle their sticky little cheeks up against mine and ask me for a new toy while we’re in Target, it’s hard to say no (especially when I’m holding an overpriced coffee I don’t technically need either). Combine my pushover parenting skills with generous grandparents and my husband’s habit of surfing Amazon to get the boys every toy he wished for as a child, and my living room looks less like a comfortable place to relax and more like Aisle 7 of Toys “R” Us. The surplus of stuff often leads me to wonder: Do my toddlers have too many toys? And frankly, I've always been too scared of the answer to actually answer that.

I could handle the fact that my decor theme is currently “colorful plastic” if the kids actually played with their toys, but many days they wander from thing to thing, never really settling on an activity. I find myself trying to engage them in their toys with little success, and although they have a wide selection, they always want to fight over the exact same toy at the exact same time. I decided to cull their toy collection significantly — not to punish them, but to see if reducing the number of toys they had access to would spark their imaginations and encourage them to play more — either on their own and together.

I gathered up every toy the kids owned except for five of them and shoved the rest into the spare room. I let them keep their books, craft supplies, and stuffed animals (because I’m not a monster), but everything else was banished. Here’s what I kept for them to play with, and why:

1. A puzzle: to encourage problem solving and logic.

2. Blocks: for learning fine motor skills, cause and effect, and basic physics.

3. A train set: for imaginative play, communication, and cause and effect.

5. A soccer ball: to encourage gross motor skills, balance, and communication, and because we just signed them up for soccer and they spent the first session sitting in the goal, picking grass. My competitive nature couldn’t deal.

Besides the obvious — cleaning up five toys is less work than cleaning up 45 —here’s what I learned.

I don’t know if they worried that if they fought I’d take away the few toys they had remaining away or if having fewer things to fight over made them less territorial, but either way, there were far fewer fights this week than there usually are.

When all the toys are up for grabs, the boys seem more interested in what the other one is doing instead of playing with the toy they have in front of them. But after a day or two of bouncing from thing to thing, their attention span seemed to grow and suddenly, they were playing side by side long enough for me to drink an entire cup of coffee before it went cold. (#Bless.)

My instinct had always been to break up a fight by trying to give them another toy to play with, piling more onto the pile, but this made me see that doing so might've been only adding to their competitiveness. With just five things to play with, it forced them to play together and share more.

Having Less Sparked Their Imaginations More

The boys usually play with one toy at a time before coming up to me and waiting for me to direct their attention to something else. Perhaps their usual wall of choices overwhelms them, or maybe having fewer toys and more floor space sparked their creativity, but whatever the reason, they found new ways to play with the few toys they had.

The giant kitchen set and dollhouse we had was moved to the basement for the week, but the boys used their blocks to bring me “snacks” and constructed a slide, tub, and furniture for their plastic dolls and stuffed animals to play with. They made the toys they had be what they wanted them to be, and it was great to see them use their imaginations like that.

Because all of their battery-operated toys were tucked away, they had to make their own noises when playing with the trains. Not only was it nice not tripping over a singing bus, it was great to see them using their language skills to play.

These Are Their Toys, Not Mine.

When I was sorting out what to keep for this week and what to store away, I chose the boy’s clunky plastic Disney characters over their smaller Daniel Tiger’s Neighborhood characters, even though they beg to watch Daniel Tiger every day and I can’t remember the last time they played with the Disney ones. Sure enough, they balked when I tried to entice them with Goofy and asked repeatedly for Daniel and his gang, so I swapped out the toys to give them what they wanted.

If I’m being honest with myself, I kept the Disney ones upstairs for me, not them. Those toys remind me of the first trip we took as a family and takes me back to the days when I could lay both babies on a blanket, go to the bathroom, and come out to find them in the same place. While the Daniel Tiger toys have moving heads and arms are more developmentally appropriate for the kids right now, part of me was trying to pretend my little boys were still babies. Taking inventory at the end of the week, I saw toys the kids were simply too old for, and others I was keeping because I liked them, not because they did.

It’s hard to admit they’re growing up, but it’s time to get a donation box ready.

Did They Have Too Many Toys?

While I don’t think we’ll adopt a “one toy out for every new toy in” policy or sell the play kitchen just yet, I’ve definitely changed my mind on what I'll look for when buying toys in the future. This experiment helped me take stock of the toys we have that we don’t need and brought to light how several toys in our arsenal serve the same function. Now I hope to have fewer toys out at a time, and rotate our existing stock every few weeks so the kids will have new play things to entice them and keep them entertained.

Going forward, I’ll think twice before buying new toys. I want to consider whether we already have something that does the same thing, and how much use I think the boys will get out of it. The money that I would have spent on new toys can be put to better use, like a family trip to the zoo or even towards their college fund. Although I thought giving my kids all the toys they wanted was showing them how much I love them, I realized it’s actually better for their development to have fewer toys to play with.