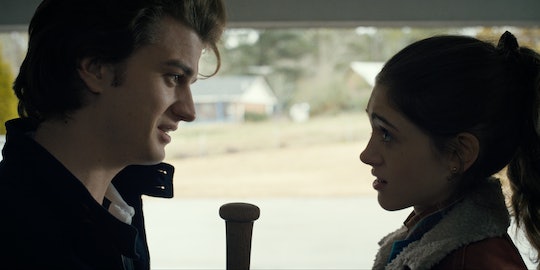 Do Nancy & Steve End Up Together On 'Stranger Things'? It's A Classic Love Triangle

(Warning: This post contains spoilers from Stranger Things Episode 8.) The relationship between Nancy Byers and Steve Harrington on Stranger Things is a curious one. Steve's character isn't necessarily bad, but because he's the cliche popular guy in school with not-s0-kind friends, you're instinctually ready to dislike him. But his character itself isn't terrible. He goes through ups and downs on the show, eventually leading to a moment in the finale that might have you wondering if Steve and Nancy end up together on Stranger Things. Well, I wouldn't put an official label on anything just yet.

Throughout the series, I was torn on Steve Harrington. He never pushed himself on Nancy, which was refreshing given the landscape of other films and shows set in the same time period, but he also wasn't perfect. Like, you wanted to like Steve, but something was holding you back. Ultimately, though, he seems to have come out the good guy — as with Jonathon — albeit the good guy in a love triangle of all good people. So what does that mean for Steve and Nancy, and where does Jonathon fit into that?

Judging by the last scene for Nancy and Steve in Episode 8 of Stranger Things, it appears that these two do in fact end up together. It's the holiday season, and the pick-up one month after the final battle and Will's return shows Nancy giving Jonathon a Christmas gift. It almost seems that these two are a thing, and Steve is a thing of the past. But wait, what's that? Oh, Nancy returns back to the couch and cuddles up to Steve, while Jonathon returns to his car, gift in hand.

So, what does this mean? Well, it seems pretty obvious that Steve and Nancy are together and, possibly, these three are actually friends? Is that maybe too much of a stretch? Steve knows that Nancy gave Jonathon that gift, so it's not like their relationship is a secret. Also, these three teenagers just went through something that no one else will probably ever experience. That's got to bring some people together, right?

While I can't say things look good for Jonathon and Nancy, they do seem to be friends, which is as much as we can ask for. The two definitely had a connection during the season, but it's just a matter of how strong that connection was on a romantic scale. For now, it seems that her connection with Steve is stronger.