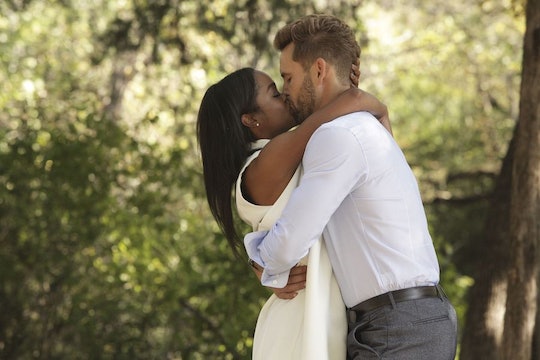 Nick & Rachel May Be Headed To The Fantasy Suite

Hometown dates are over for Nick Viall and his final four picks, and while they varied from tear-filled (Vanessa's mega-protective fam) to tense (Rachel's no-nonsense mom grilling Nick on his wokeness) to frivolous (Corinne's $3000+ shopping spree?), Nick still has to hand out roses before their snow-filled Scandinavian fantasy suite adventure. So do Nick and Rachel have sex in The Bachelor fantasy suite? Either way, we know it doesn't work out for them in the end.

Rachel has already been announced as The Bachelorette for next season, following years of criticism directed at the network for neglecting to feature people of color more prominently on the show. We finally have our first black Bachelor or Bachelorette, and her hometown visit proved that the show is not interested in perpetuating the harmful idea of "color-blindness." Race was discussed frankly and openly by Rachel's family, and everyone dealt with their discomfort like grown ups (ie., by admitting the conversations were uncomfortable and then having them anyway). It sets a hopeful tone for how race will be discussed on Rachel's season, with the potential for barriers to be smashed on the ABC show. So, we know Rachel doesn't win Nick's season, but does she make it to fantasy suites before she and Nick part ways?

It's difficult to imagine that in a final four between her, Raven, Corinne, and Vanessa that Rachel would get sent home at this point. She got Nick's first impression rose and their connection has been one of the strongest all season long. Assuming she does make it to fantasy suites, the question of whether she and Nick have sex probably won't be definitively answered on the show, because it almost never is. The point of fantasy suites is to have one night without cameras, which yes, often gives couples the chance to have non-sneaky sex for the first time, but that isn't really the point. The point is for them to have meaningful, intimate time together that's actually private to try and gauge whether or not they could sustain a real relationship outside the contrived environment of the show. Sex is part of that, but it's not the whole thing.

We often only learn about whether couples had sex in the fantasy suite when they give post-show interviews after the season airs to address some controversy or another. Usually, it just winds up generating more drama and response statements to response statements. In Andi Dorfman's case, she wrote a whole book about it. Ultimately, the show respects the fact that it's not anyone's business whether the couple has sex or not. Fantasy suites week is just another tool it gives couples to gauge their compatibility. The details of what happen inside aren't really for or about the audience.