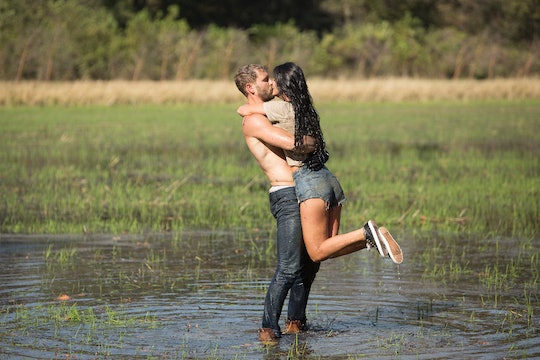 Things May Heat Up Between Nick & Raven

If I had to bet on any one remaining Bachelor contestant who I was sure is heading to the overnight dates on Monday's episode, it would be Raven Gates. Bachelor star Nick Viall has had nothing but positive things to say about Raven, who initially flew under his radar for the first few weeks, but ultimately impressed him with her carefree, smart, and funny attitude. While we won't find out for sure whether Nick is giving Raven a rose following their date in Raven's Arkansas hometown, many are wondering whether Nick and Raven have sex in The Bachelor fantasy suite.

There's no doubt that Raven and Nick had the most successful and unproblematic hometown date of the four that took place on last Monday's episode. While Nick clearly has strong feelings for each of the other women that are still in the competition, there were red flags of varying degrees in each of their dates.

Rachel Lindsay and Nick's hometown date went fairly well, but there was some tension regarding the discussion he had with her family about race. With Corinne Olympios, it seemed fairly clear that Nick was a little taken aback by Corinne's father questioning his career and revealing to Nick that Corinne had said she's be comfortable being the breadwinner. Arguably, Vanessa Grimaldi's date went the most poorly — the tension between both sides of her family and Nick was palpable, as they were all extremely worried about Nick hurting her and questioned the logistics of how their long-distance relationship would work.

With Raven, it was made even more obvious during their date in Hoxie that their sexual chemistry has only grown as their relationship has deepened. They basically couldn't keep their hands off of one another, rolling around in the pond and making out. Given that I'm all but positive that Raven will be making it to the overnight dates (given how far their relationship has progressed and the positive note they left things on when Nick departed), I would guess that these two are very likely to have sex in the fantasy suite. (Not that it's any of our business — but again, diehard fans can't help but be curious!)

The only sticking point that might prevent a sexy/romantic Fantasy Suite Date would be Raven's hesitation in opening up to Nick. As she explained during her confessional, she couldn't bring herself to tell Nick that she was falling in love with him, though she wanted to. She feared that she'd been the only one not to tell him the truth about her feelings for him.

In Nick's PEOPLE blog post about the hometown dates, he confessed that he could tell "she was holding back a little," aware that the "broken trust" that ended her last relationship (when she walked in on her boyfriend cheating on her) made her a bit hesitant to open up. He also voiced his concern that she might not be able to get to that level of trust with him. If that's truly the case, Raven might have a hard time opening herself up to Nick enough to be intimate with him as well, which would mean no fantasy suite sex.

In any case, viewers will just need to tune in to the new episode to see whether Nick and Raven make it to the fantasy suite and how it all goes down — or whether Andi Dorfman's surprise presence will make the Bachelor star pull out of the competition entirely.