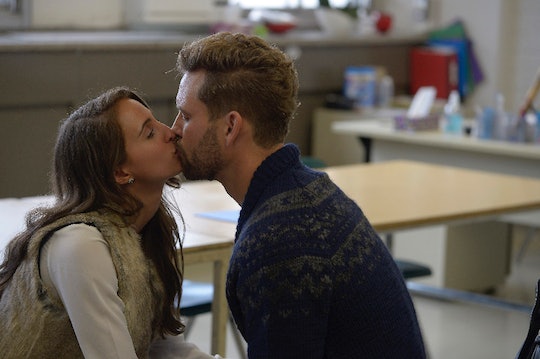 Nick & Vanessa May Heat Things Up

With Nick Viall's Bachelor season coming to an end, odds are most viewers have made up their minds about who they believe will win. Whether you're convinced that Vanessa Grimaldi has it in the bag, that Raven Gates won Nick's heart in the end, or that dark horse Corinne Olympios pulled off an unexpected win, I'm assuming by now you've placed your final bets. But there are still some major moments ahead — like finding out who is going to the overnights and whether that'll lead to sex. Whether Nick and Vanessa have sex in The Bachelor fantasy suite is a question that's certainly on many viewers' minds heading into Monday's episode.

Obviously, there's no way to know the answer to this question for sure. By their very nature, the fantasy suite dates are the most intimate moments of any Bachelor season. The cameras aren't allowed in the rooms while the season's star and their contestants are having their overnights. Beyond (understandably) not having access to what goes down during these dates, the majority of Bachelor Nation couples don't choose to get candid about whether sex did happen on their overnight or not.

Then again, Nick *is* known for his sexually-open attitude, especially when it comes to his relations on Bachelor shows, so he may just come right out and say whether sex occurred right after the dates take place. It's been a topic of on-screen discussion between contestants post-fantasy suite in the past. In any event, it's really none of our business whether or not any Bachelor or Bachelorette has sex with zero, one, three, or 20 of their contestants in a given season, in or out of the fantasy suites.

Of course, just because it's none of our business, that doesn't mean we can't be curious about it and speculate. At this point, it's clear that Nick is a very sexual person and that he has major chemistry with each of the remaining women. The tension was there from the very start with Nick and Vanessa, from the moment she stepped out of the limo and he called her "a keeper." The way Nick was looking at Vanessa during their first one-on-one Zero G date also couldn't be mistaken — he's head over heels for her.

Unfortunately, their date in Vanessa's hometown didn't go entirely smoothly. On the Feb. 20 episode, Vanessa and Nick's visit to her school went well, but it was a different story when they met with both sides of her family. Unlike his hometown dates with Corinne and Raven (which both went pretty much 100 percent well), there was a bit of friction and tension between Nick and members of Vanessa's very protective family. It was so noticeable that Nick commented on it in his confessional.

Vanessa, for her part, wasn't thrilled after she found out that Nick had not only asked her father for his permission to propose to her, but had also done the same thing with the other three women's fathers as well. She was visibly shaken by this, and her faith in their bond seemed weakened.

Even if Vanessa is given a rose to move on to the overnight dates, she might not necessarily feel comfortable accepting a key to the fantasy suite after this debacle. In any case, fans will just need to wait and see whether this couple will pull through and enjoy a ~fantastical~ overnight date.