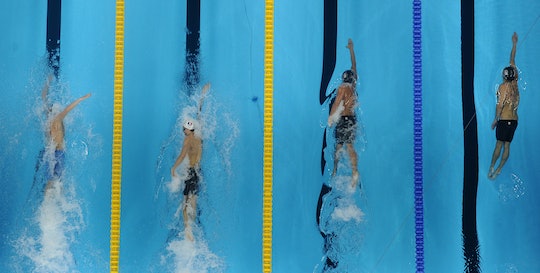 Do Olympic Swimmers Wax Their Body Hair? It Is More Common Than You'd Expect

Some could say that swimming is one of the more celebrated sports during the summer Olympics. From the intense level of competition, to the gold medals won by Michael Phelps, to Ryan Lochte's personality — there are so many things to love about the event. Another thing to love about the event? The insanely ripped and hairless bodies of the swimmers — I know, its funny. But people have had to wonder why Olympic swimmers wax their body hair.

Some Olympic swimmers do choose to wax or shave their body hair — for very good reasons. Waxing or shaving one's body before a swim meet can mentally prepare swimmers and according to some swimmers, help your performance by making you go faster in the water.

According to The Guardian, "shaving is both psychological and practical. It does take the slightest layer of resistance off the exposed skin on backs, arms and legs, and it also scrapes some kind of dead skin off, making it more sensitive in the water." While it sounds a bit like a conspiracy, there is also a little bit of scientific evidence to back up the "shaving helps your performance" rumor. According to one study involving swimmers who shaved vs. the control group, "removing body hair significantly reduced the rate of velocity decay during a prone glide after a maximal underwater leg push off." Meaning? Shaving body hair did reduce a little bit of "drag" while swimming. So it works — but it won't make you a better swimmer just because you shaved your arms and legs.

U.S. Olympic swimming's most notorious and lovable personality, Ryan Lochte, has been known to be outspoken about his, er — hairless body. In his 2013 reality show, What Would Ryan Lochte Do? Ryan shaved his arms and legs with a gold plated razor in front of the camera. In a recent interview with GQ magazine Lochte admitted that he had been shaving his entire body since he was "13 or 14" years old. Lochte also admitted that shaving your body is an advantage for swimmers and that he has since ditched the gold-plated razors for laser hair removal. "I think ladies love swimmers because we're hairless," Lochte said. Classic Ryan Lochte.

When it comes to swimming, shaving (or waxing) the body makes the body more aerodynamic and sensitive in the water. For swimmers, there are very specific instructions on how to shave your body (to avoid cuts and lots of pain) so it is very important that swimmers enlist the help of a friend and alternate between razors so the blade does not get dull. Or, they can wax or laser their whole body like Lochte does.

I know I will keep a close eye out on the swimmers this August while watching the 2016 summer Olympics — not only because I want to know if they're hairless but to watch their performances, too.

More Like This
Adam Levine & Behati Prinsloo Welcome Their Third Baby & This Is Where It Gets Real
Sheryl Lee Ralph's Husband & Kids Are Her Biggest Cheerleaders
Everything You Need To Know About Chris Stapleton’s Wife & Kids
Philadelphia Eagles Wide Receiver A.J. Brown Says His Kids Give Him “Strength”
What Parents Are Talking About — Delivered Straight To Your Inbox