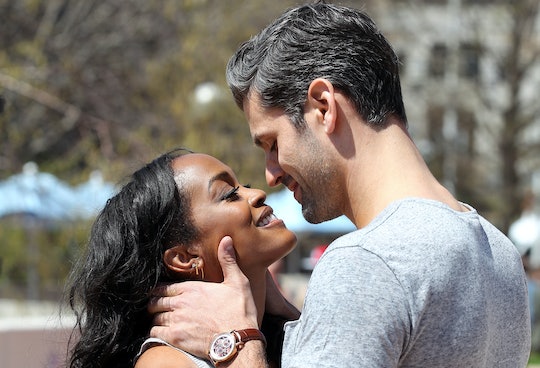 An essential part of every season of The Bachelorette and The Bachelor is the Fantasy Suite. While the explicit details are obviously never shown (this is an ABC show, after all), it's a big deal because it's pretty much implied that the star has sex with her final choices. With only Peter, Bryan, and Eric left vying for Rachel's heart, and the rumor that all three will be getting a key to the room, fans are asking: do Peter and Rachel have sex in the Fantasy Suite? It's really not anyone's business, aside from the people in question.

As a former final three contender herself, Rachel is more than familiar with how the Fantasy Suite goes. She made it completely clear that she had no intention of having sex with him when cameras were nearby, as she told People.

When it comes to the Fantasy Suite, when I was on Nick [Viall]‘s season, I said I wasn’t going to do it. One, because I didn’t think I’d make it that far — but by the time I got there, my feelings for Nick were strong. I was falling in love with him. For me, that private time was really important to see if what we had was the same on camera as it was off.

Going into this season, Rachel said from the beginning that she didn't see herself getting into intimate with all three final choices.

She recently told to ET Online, "I'm a woman of my word! I just said, I didn't do it with everyone." She added, "It's the first time you have extended time with this person, for me, it's like, if I'm taking the next step, I have a list of questions."

So what does that mean for Peter? In promos for the upcoming episode, she definitely has a lot of questions for him. Rachel and Peter can't seem to agree on what they want out of a relationship. She tells him that she's not just looking for a boyfriend, while he seems to be struggling with finding "common ground" between them. Could their remaining issues mean that Rachel will be reluctant to have sex with him? Maybe, but it's not really anyone's concern but theirs.

Rachel clearly values her connections with the men she's chosen, and since so much of her life has been on camera, it's hard to blame her for wanting to keep this to herself. Whatever happens in the Fantasy Suite is deeply personal, and Rachel can choose to have sex, or not, with whoever she wants.