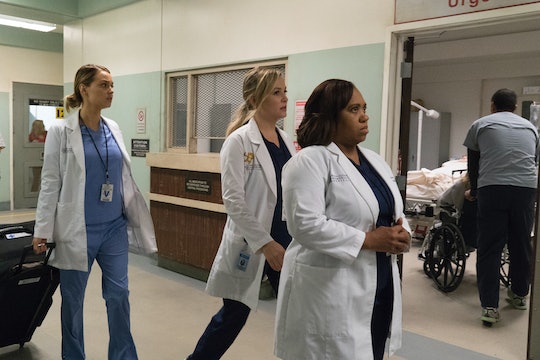 In the latest episode of Grey's Anatomy, Bailey, Arizona, and Jo headed to a prison hospital to help a 16-year-old inmate who was pregnant. The girl, Kristen, wished she could keep her baby and mentioned how she once saw a movie where a woman was allowed to do that. Although Bailey scoffed at the idea, Jo mentioned that there are in fact programs that do allow mothers to visit with their children on a daily basis. So do prison nursery programs actually exist outside of Grey's Anatomy? It turns out Jo was right; they do.

More and more prisons are creating prison nurseries that allow women to keep their newborn children with them while incarcerated. According to The Atlantic, the length of time mothers can keep their children with them varies, but in most states it's 18 months. The women and their children are housed in separate units from the rest of the prisoners on the prison grounds. As of July 2015, nine states offered prison nurseries, and all but one opened within the past two decades. Bedford Hills Correctional Facility in New York, was the first women's prison in the country to have a prison nursery, which it opened along with the rest of the facility back in 1901.

According to Pacific Standard, at Bedford's prison nursery mothers in the program share the living space with a crib and their child, occasionally doubling up with another mother if there's no more space. The mothers also participate in parenting classes, change diapers, nurse, and take their baby to regular check-ups with pediatricians who come to the prison.

The idea behind these programs is simple. Not only is the process of mothering rehabilitative to the inmates (there's lower recidivism rates amongst mothers in these programs), but it's also helpful to the children as well. Often if a women is pregnant when she goes to prison, she has to give up her child after birth to either a friend, family member, or the foster care system. It's usually difficult for mothers to be reunited with their children after their release if they're placed in foster care and some never see their children again.

In the (fictional) case of Kristen, there is in fact a prison nursery program at Washington Corrections Center for Women. Since Grey's takes place in Seattle, we can assume this is the prison she'll be in throughout the remainder of her sentence. However, based on her volatile history and the fact that she'll be in prison for 20 years to life, it's unlikely this would've been an option for her anyway.

Still, what ends up happening to Kristen isn't great since her mother agrees to adopt the baby (Ellie) but has no intention of ever visiting Kristen with the child. Unfortunately, although this is a fictional story, it's one that's very real for some mothers. But thankfully, there are programs out there that exist, so that a mother and child can be together for the most vital part of a child's infancy. Let's just hope even more prisons start to allow this kind of treatment and that this Grey's storyline helps to highlight such an important topic.