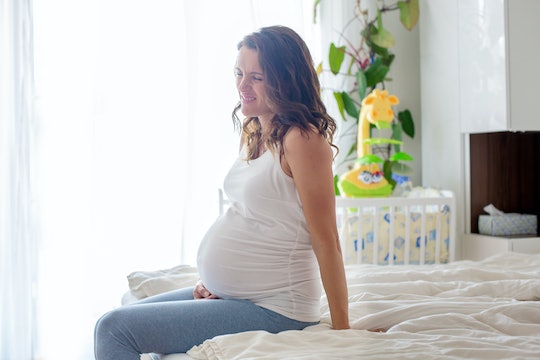 When you're in your final month of pregnancy, it's hard not to be on high alert at all times for the early signs of labor. I questioned every little ache and pain I had, wondering, "Is this it? Is this happening?" A friend of mine had told me that Braxton Hicks contractions feel like cramps, but then I had to wonder, "Do real contractions feel like cramps too?" Would those first labor pains be like in the movies, when the woman just stops suddenly and grabs her belly in pain, or would they be more sneaky, more subtle?

In my case, my contractions came on slowly, feeling at first like I had gas; like I had maybe eaten my dinner way too quickly. But some women do describe their contractions as being similar to period cramps, according to Parents. "It starts out like menstrual cramps — and the crampy sensation progressively gets worse and worse," explained Paul du Treil, M.D., director of maternal and child health at Touro Infirmary in New Orleans, in an interview with Parents.

Yet, ask any woman who's experienced childbirth to describe what her contractions felt like, and you'll most likely get a different answer. I asked my mom what her labor pains felt like and she got this distance look in her eyes and said, "like a vice!"

Cat Bowen, one of Romper's own writers, had a different analogy for her contractions "My stomach was like an overfilled water balloon that felt as though it was nearing on bursting every time I had any kind of contraction. It was truly hard to the touch to the point where it freaked my husband out," Bowen explained in a previous Romper article.

Of course, there are definitely kinds of contractions — the early ones and those that come later that make everything else seem trifling easy in comparison.

One mom named Meagan, responding to The Cut's informal survey about what the sensation of contractions feel like, described it like this: "The early labor contraction was more uncomfortable than painful, and mostly made me squirm and want to move my hips, as if giving the world a lap dance. The active labor contraction, which felt like a tense crushing-squeezing, an implosion of bones and muscle."

Another mom, Veronica on a Baby Centre UK forum, noted how her contractions felt up until the transition stage, "[Mine] were like the worst period pains I've ever had. Not in terms of how much they hurt, but that the feeling was like someone reaching inside my uterus and twisting it."

I had two unmedicated births and as my contractions grew in intensity, it felt like someone was very aggressively wringing out a wet towel, and that towel was my entire uterus. Yet, when I close my eyes now and try to remember what it truly felt like, I can't. It's a weirdly fleeting phenomenon.

On the flip side, when it was all over, and my rosy pink baby was first placed on my chest, that is a moment that I'll remember always, with crystal clarity. That is the moment that I'll savor for a lifetime.