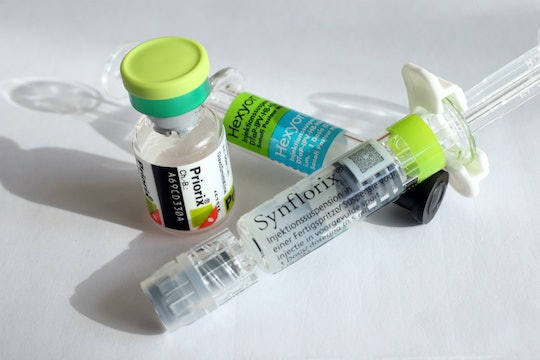 The Consequences Of Not Vaccinating For Wealthy Parents

According to a recent op-ed in The Washington Post, there are some who believe that rich parents "get away" with not vaccinating their children more often than parents in lower income brackets. But can that really be true? The author of the opinion piece, Linda C. Fentiman, also has a new book called Blaming Mothers: American Law and Health Risks to Children, so she's done the research about how women in different demographic groups are treated by the law — and, unfortunately, there is evidence that affluent parents are joining the anti-vaxxer movement and, in turn, getting away with any potential consequences more often than their lower-income peers.

More Like This
New Report Finds A Known Carcinogen In Popular Sunscreens
Does Your Babysitter Need To Wear A Mask? Here's What The Experts Say
Nobody Wants To Raise A “Karen” — Literally
Parents Are Vaccinated, But Still Nervous About Their Kids Getting The Shot

Fentiman notes that the places with the highest rates of unvaccinated children are in affluent places, like Marin County, California, and wealthy parts of large cities like Chicago and Manhattan. In addition to that, there are also a handful of celebrities like Jenny McCarthy and Kristin Cavallari who spread the dangerous rumor that vaccines and autism are linked. (They are not.)

It's not very difficult to get an exemption from vaccinating children in most states — many allow parents to simply sign a paper saying that they don't "believe" in vaccines — and there aren't any laws on the books about endangering one's own child and every child they come into contact with by not vaccinating them. But there are laws that prosecute mothers for "not protecting" their kids for other reasons that often unfairly target lower income parents.

Fentiman notes in her article that there are mothers, for example, who have been sentenced to jail for a short period of time for just mentioning that they were recovering drug addicts while pregnant. Women have faced criminal charges for not taking their children out of an abusive environment (which is not the easiest thing to do); Others have faced jail time for similarly baffling reasons — like Regina King, who suffered from mental health issues and drug abuse, and who was prosecuted for murder because she delivered a stillborn baby, even though it's not clear that her cocaine caused the death.

The justice system often disproportionately affects lower income people, as well as people of color, so it's more likely that a poorer mother would find herself in trouble for "endangering" her children, even if the situation is largely either out of her control or not exactly her fault. Fentiman's point is that affluent parents who don't vaccinate their children really are endangering their children — and, she argues, they're getting away with it.

When wealthy parents don't vaccinate their children and then those children spread measles or the flu around their school, lower income children get sick, too, as was the case in the recent measles outbreak in a Somali immigrant community in Minnesota that was targeted by anti-vaccine proponents. Those parents might not have the resources or health insurance to care for their kids or get them vaccinated in the first place, leaving them vulnerable to both physical consequences and legal ones.

In other words, Fentiman claims, the actions of the wealthier parents negatively impact the poorer ones, and there's often no way to hold them accountable using the law. Really, all parents who don't vaccinate their children are "getting away with it." But the justice system targets lower income parents for allegedly harming their children all the time. Not applying the same standard to all parents, regardless of income bracket, just worsens the sting.