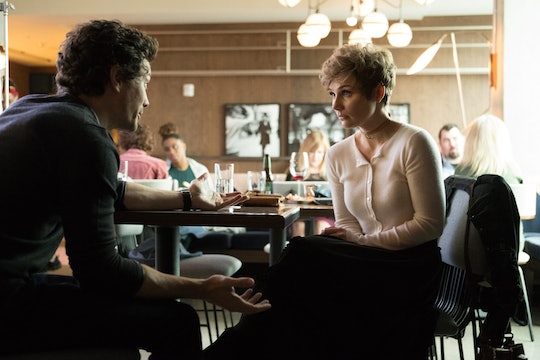 Damien Returns To 'Nashville' For A Suprise Announcement

Nashville has returned from its midseason hiatus with an unplanned pregnancy, a wayward homeless teen, and more mental health struggles for Juliette. But fans of Scarlett and Gunnar are laser-focused on whether or not the on-again-off-again couple is going to manage successfully co-parenting Scarlett's baby, which she's definitely keeping, and which a blood test revealed Damien (The Exes' music video director) is the father of. Scarlett chooses to share the paternity results with Damien, which leaves fans wondering: do Scarlett and Damien get back together on Nashville? Don't rule it out.

Although Scarlett has spent most of Season 5B avoiding Damien like a woman in her first trimester avoids strong smells, she finally bites the bullet and agrees to meet him for beverages of varying alcohol content. (She orders a water; he, a double Grey Goose straight up.) He takes the news less than gracefully, oscillating between horror (no), skepticism over paternity (hell no), and unsubtle judgement of Scarlett for choosing to keep the baby (honestly, dude, at this point, just go back to England). For her part, Scarlett is tough as nails through all of it, deciding several times that she's just going to walk away, but generously standing by Damien while he cycles through the full range of human emotion.

Later, once he's done processing (ie., drinking), Damien goes running to Scarlett's house, which has already been thematized by Gunnar this season. He tries — flails, really — desperately to sweep Scarlett off her feet with a declaration of love and promises that they'll make a great couple. But she's already done this once before and she has a pretty clear idea at this point of what does and doesn't work for her. (Whoever said pregnancy brain doesn't allow for moments of shining clarity?) She gently frees her hand from Damien's claw-like grasp and points out that none of what he's saying about what a happy family they'd be is true.

In previews for the next episode, however, we see Scarlett perhaps questioning her decision, confiding in Gunnar that Damien has asked her to move in with him. As if caring for yourself when you're pregnant isn't difficult enough, poor Scarlett is also stuck managing the emotions of two men, both throwing themselves at the chance to raise a child with her. It's not about you right now, guys! She seems torn about what to do in the clip, but this is the strongest and most self-preserving we've ever seen Scarlett on Nashville, so whatever she winds up doing, you know it'll be one hundred percent for herself (and her baby).