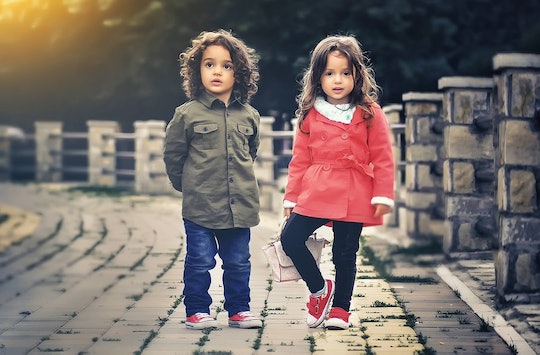 Do Siblings Born Right After Each Other Fight More?

If someone were to ask me if siblings born right after each other fight more, I would say yes without missing a beat. But I am the mother of two boys born 15 months apart, so my opinion is a little biased. Now, I haven't conducted any formal research or lab studies, but I am a firm believer that when you are living the question at hand, you tend to have the type of first hand experience that makes you an expert (who needs formal credentials, right?). But even when you know you're right, it's nice to have some legit backup from those who have more than street cred. So it was very confirming for me to find that there is truth behind my belief.

According to the Center For Parenting Education, "siblings who are close in age have high access to one another and are more likely to be physical with one another." This means kids who are born back to back spend more time together, which leads to more things to fight about and argue over. Being close in age means they are likely to be interested in similar things — so fights over things such as favorite toys are more likely to erupt throughout the day.

When considering how close is too close for sibling conflict, Mayo Clinic pointed out that children, "less than two years apart might experience more conflict than do children who have greater age differences." However, this doesn't mean that there is a magic number of years between kids that will prevent arguments all together. As it turns out, no matter how many years separate your kids, there is bound to be some level of sibling rivalry.

There are many factors that lead brothers and sisters to fight with one another, and as they grow and change throughout their life, so do the reasons they argue. According to the Kid's Health website, one of the biggest influencers in sibling squabbles is changes in needs, anxieties, and self-identity. As these aspects of their life evolve, it effects the way you children relate to one another. The things that caused tension when they were toddlers will differ from the arguments that occur in the teen years.

When you boil down what is at the center of most sibling fights, the result is usually fairness. As Parents magazine pointed out, conflict between siblings typically arises when there is a perception of disparity between them. Feelings of unfairness not only creates problems between the kids, but can be the cause of many back-and-forth's between children and parents. Which is why for the foreseeable future, my household will always have two of every cup, toy, and sports ball imaginable — and I am fulling owning the fact that this is more for my sanity than anything else. Deep down, I know that my kids know how to share (and often time they do share nicely) but if I'm being honest with myself, household peace trumps sharing skills any day.

Although kids close in age may fight more, sibling rivalry is one of those parts of family life that all parents will face at some point. As a mother who deals with this on a daily basis, my gift to the rest of you in the same boat is this: accept the inevitable. No parent likes to see their kids argue, but the sooner you give in to the fact that it is going to happen — and stop expecting perfection — the easier it will be to handle those tiffs when they pop up.