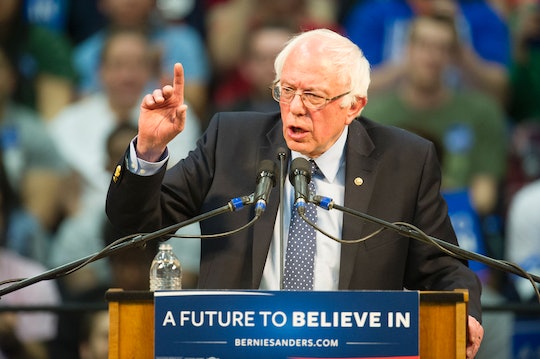 Do Superdelegates Matter In The Election? Maybe This Year More Than Ever

State primary and caucuses are really just a contest to collect enough committed delegates for the national party's convention to lock up the party's nomination for the general election. Delegates are the ones who actually determine the nominee, and those delegates are usually allotted proportionally depending on votes. And then there are superdelegates. You're going to start hearing a lot more about superdelegates in the weeks ahead and you might find yourself wondering, do super delegates matter in the election? The answer is yes. Superdelegates might be more important in the 2016 election than at any other time in history.

From today all the way through spring and into the summer convention season, the whole election is going to come down to which candidates can wrap up the number of delegates they need to finally, formally lock up their respective parties' nomination for president. The Democrat nominee needs to win 2,472 delegates for the nomination, the Republican needs 1,237 delegates to win. In all primaries and caucuses held before March 5, delegates are awarded on a proportional basis, meaning candidates can pick up a few delegates in those early state caucuses and primaries even if they don't place first in the race. After March 1, the number of state delegates — the number each state has at the party convention — is determined solely by state population and are all committed to the winner of the race for the convention. Done deal.

Delegates in each state and territory are chosen based on criteria determined by each state's party officials. Then there are superdelegates.

In the Republican party, the designation of "superdelegate" is just reserved for current state party officers, but they don't actually have any additional power. They are required to vote along with the rest of the delegates based on the outcome of their state party elections. With the Democrats, it's a far different story.

On the Democrat side, "superdelegate" is a term given to any current, and many previous, office holders who are part of the state's national delegation in addition to anyone else the national or state parties deem worthy of superdelegate status. So, governors, members of Congress, and the like. Essentially, the Democratic party's superdelegates are the epitome of the "establishment" — those who are currently in power and have an interest in maintaining their hold on power within the party. And, there are a lot of Democratic superdelegates — they make up about 15 percent of the total Democratic delegates. More importantly, those superdelegates aren't bound to a particular candidate based on a vote. They can cast their vote for whichever candidate they choose and are not committed to any particular candidate until the convention, essentially giving the national party elites more influence over the outcome of the primary process than voters.

This disproportionate influence of establishment Democrats has become a focus of this primary season, because, despite an impressive win for Vermont Sen. Bernie Sanders in New Hampshire, former Secretary of State Hillary Clinton was able to walk away with far more superdelegate support, practically eliminating Sanders' delegate edge after winning the election. For Sanders' anti-establishment, political revolutionary supporters, the consolidated power of the superdelegate system is just one more way the system is rigged against them. If the race between Clinton and Sanders remains tight, particularly when it comes to delegate counts, the superdelegates could be the only votes that matter when it comes to selecting the Democratic nominee for president.

Ironically, both Sanders and Clinton — based on their current and past positions — are entitled to vote at the July Democratic Convention as superdelegates. But there are some superdelegates, like Florida Rep. Alan Grayson, who reacted to voter backlash over superdelegates by polling voters to decide who should get his superdelegate vote. Sanders was the winner by a landslide. (Some argue that something similar could happen throughout the course of the primaries — superdelegates could change their support if they see more people rallying around Sanders.)

So, keep your eye on the superdelegate counts heading into the Democratic National Convention starting on July 25 in Philadelphia, Penn. Because those votes could change everything.