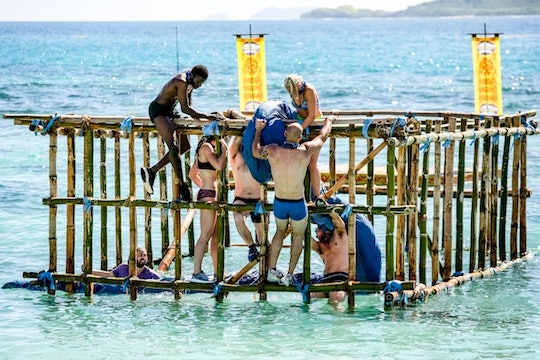 Survivor is now in its 38th season (seriously) and life has not gotten any easier for contestants. They're still subjected to test their physical endurance as well as mind-bending psychological games for weeks on end in the hopes of coming out the other side the winner. Personally, I don't think I could do it. Every time I watch the show all I can think is boy, I hope Survivor contestants get paid for this stuff.

Thanks to former contestant Jon Dalton, aka "Jonny Fairplay" — aka that guy that did not play fair when he convinced fellow contestants his grandma had died — I now know they do. Back in May 2018, he told TMZ in an exclusive video interview that the first person out (who does about three days of work) gets $12,500. Jury members make around $40,000, runner-up gets $110,000 and the winner makes one million ten thousand dollars.

I never even want to go "glamping," so I can tell you without a doubt right now that I would turn down 20 million dollars to participate in the show for a week without batting an eyelash. But there are other ways to make money from appearing on Survivor.

I'm not just talking about becoming an Instagram influencer à la former Bachelor contestants. All you have to do to win a little bit of extra money on Survivor is get Sia to like you and she'll give you free money, no filter needed. Yes, the Sia who swings from chandeliers.

The singer is a Survivor super fan and has appeared on finale episodes to give her favorite cast members money. On the Kaoh Rong season, she gave contestant Tai Trang $50,000 and matched that gift with a donation to an animal charity of his choice. So, he won $100,000 because she was impressed that he saved a chicken from becoming his castmates' dinner — not bad.

Sia also gave Ghost Island contestant Donathan Hurley $10,000 for bravely sharing his story about growing up gay in Kentucky and then later taking care of his grandmother when she got sick. Once Sia discovered the money was tax-free, she tacked on an extra $4,000 and let hurly know via Twitter.

So what do you do when you win free money? Well, if you live in Kentucky, you can do a lot, as Hurley told Entertainment Weekly. "She gifted me 14k tax-free, and what I did with it was took a cruise and the rest went toward buying me, mom, and Maw Maw a home. We have never had that before, and it was my first cruise!” I'm almost tearing up, it's so sweet.

Most recently, the singer gave Survivor: David vs. Goliath contestant Davie Rickenbacker $14,000 because she "admired his spirit, according to the EW article. Since Sia announced her gift via an email message after Rickenbacker had already met her, he was skeptical. He contacted production, who had to contact Probst to confirm that the email was legit.

“I receive an e-mail back from production saying that they spoke with Jeff Probst and this is indeed Sia that I am conversing with and yes, it is real! Really, Jeff, did you just forget to tell me that you gave the amazing Sia my e-mail address? No big deal — huh, Jeff?” Rickenbacker joked.

Hi, Mr. Probst... it's really no big deal if you pass my email along, you have my permission.