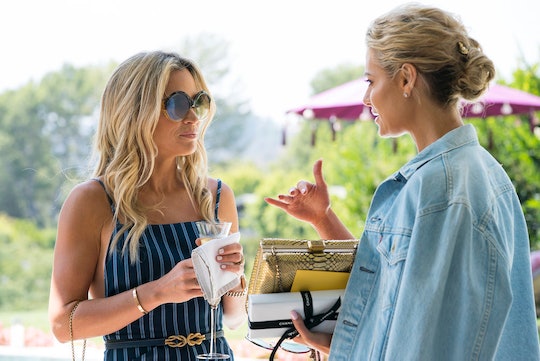 The Real Housewives of Beverly Hills returned for Season 9 earlier this month, and given last season's conflict between Dorit Kemsley and newcomer at the time Teddi Mellencamp Arroyave, fans may be wondering where the pair stand now. Do Teddi Mellencamp and Dorit Kemsley get along? There has been one major development in their relationship, which hints at smoother sailing in the season ahead.

When Dorit first launched her swimwear line Beverly Beach by Dorit in May of 2018, the Beverly Hills Housewife named different styles in the collection after each of her castmates — all of them, that is, except for Teddi. The daughter of rock musician John Mellencamp, Teddi took a swipe at Dorit over the swimsuits on Twitter last April. But last month, Dorit announced that two new styles were being added to the collection: the Teddi and the Denise (named after Season 9 newcomer Denise Richards). She posted a photo of the new styles on her Instagram, which suggests that the beef between Dorit and Teddi has been squashed. Last March, Dorit told Page Six that Teddi would have to "get back in her good graces" to get a swimsuit named after her — and now she has!

The feud between the two infamously began last season when, during a party hosted by Teddi, Dorit was served rosé in a champagne flute. She asked a server if she could please have her wine poured into the correct glass, which was pretty widely interpreted as an obnoxious request, both by her castmates and by RHOBH fans on Twitter. "I mentioned about the glass, because I do pay attention to those things," Dorit said to Lisa Vanderpump in the episode, adding of Teddi, "I’m finding her to be a little bit tightly wound." Says the woman who can't drink her summer water from improper stemware.

Later in the episode, when Teddi told Dorit she didn't care about the incident (albeit while cursing), Dorit screamed back, "You are psycho. You’re psycho, honestly!" Teddi tried to suggest they drop it, but Dorit responded, "I’m not going to get over it if you keep acting like a psycho bitch." Needless to say, the pair didn't exactly work out their differences over the course of the season.

In an interview with Us Weekly after Season 8 wrapped, Dorit revealed that she and Teddi weren't on good terms since the show had finished filming. "We haven’t spoken. I’ve definitely been a bit taken aback watching her, the way she’s talked about me. It’s so different to the relationship that we actually had," she said. "We’re very different."

But in a post to her Bravo blog last May, Teddi wrote, "I continue to try and find the positives in Dorit," adding, "I think if we really work on our ability to communicate, we can be good again."

To me, it seems like Dorit was the one who held onto their conflict, while Teddi tried time and again to move forward. But something must have happened to patch things up between them, since Teddi finally got a swimsuit nod. Fans will just have to stay tuned to find out what it is. RHOBH airs Tuesday nights on Bravo.