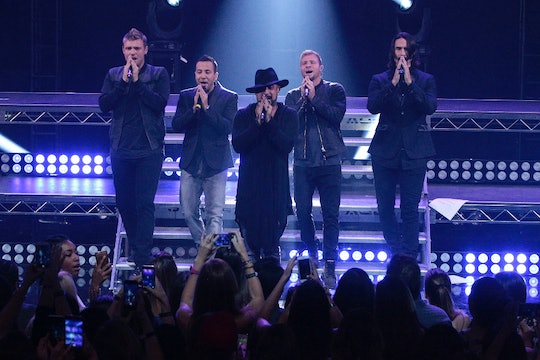 The Backstreet Boys Are 'Bachelor' Bound

When news broke that the Backstreet Boys would be making a cameo appearance on Nick Viall's season of The Bachelor, fans were thrilled – and surprised. Bachelor Nation has certainly featured its share of musical guests in the past – like Dan + Shay, a country duo who appeared on JoJo Fletcher's season of The Bachelorette – but never the hottest (or second-hottest, if you're in the presence of diehard NSYNC fans) boy band of the '90s. They're such a big name that their appearance on the show was a big grab for the network, leading many to wonder if the Backstreet Boys watch The Bachelor.

According to photos released by the network in advance of the episode's airing, it's been confirmed that the Backstreet Boys will be appearing on the Jan. 16 episode of the season. News originally broke back in October that Nick and a gaggle of his girlfriends would be going on a group date to a Backstreet Boys concert. According to photos snapped while the date was originally filmed, it's clear that the Bachelor group will actually be on stage with the beloved boy band for a portion of the concert. Color me jealous. This is definitely set to go down as one of the greatest date outings in Bachelor history.

The women (clad in color-matching outfits) and Nick apparently spend part of the date learning BSB choreography in order to dance with the group on stage, according to several photos released by ABC.

On top of all that Bachelor alums Ashley Iaconetti and Becca Tilley join in on the fun at some point, appearing to be sitting on stools onstage, getting serenaded by the group. Best Bachelor episode ever, or what?

While it's unclear if the group, personally, are fans of the series, they're clearly very excited about their appearance and have been heavily promoting it on social media in the lead-up to the episode.

One member of the boy band spoke out about the experience. AJ McLean told Us Weekly that filming the segment "was a lot of fun." "I wish them all the best of luck, and I do hope Nick does finally find that special someone," McLean said. With the Backstreet Boys in his corner, how can Nick possibly fail?