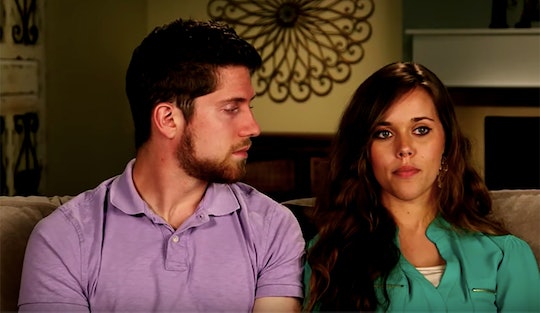 Do The Duggar Women Ever Travel Alone? Fans Think There Could Be An Unspoken Rule

One of the lesser mentioned factoids about the Duggars is that they love to travel. From countless international trips (Japan, Nepal, El Salvador) to a handful of mini-excursions around the United States (Los Angeles, New York City, Washington, D.C.) it's safe to say the family is well-traveled. But what's worth noting about these vacations is that most of them include the entire brood. Making matters even more curious is that it's rare to see Duggar spouses traveling without each other, specially where it concerns the women. Of course, this phenomenon raises a very legitimate question surrounding whether the Duggar ladies can go on trips without their husbands. Although this inquiry might seem odd to some, it's reasonable when you consider the family's strict rules about dating and marriage. That all being said, do the Duggar women ever travel alone? As it turns out, the Duggar women *and* men might not be allowed to vacation solo.

Now that most of the older Duggar siblings are married or are in the throes of an engagement, most of the family's traveling is restricted to the United States. It's a bit hard to travel internationally with a gaggle of infants, right? The good news is the fam's home in Tontitown, Arkansas, isn't too far away from fun destinations like Waco, Texas, for instance. Waco, as many fans probably already know, is home to Chip and Joanna Gaines' famed Magnolia Market and new restaurant, Magnolia Table. And given that Waco is only a seven-hour drive from Tontitown, it makes sense that a large portion of the Duggar family decided to drive down to the city for a little sightseeing.

On Monday, Anna Duggar opened up about the brood's mini-trip, writing, according to Instagram:

Friday we traveled 436 miles to reach Waco and had a wonderful visit at the Silos! Our kids had fun playing corn toss with dad, while mom went shopping! A group of us had an amazing lunch at Magnolia Table. After lunch was finished, Mason was ready for a nap and mom was ready for coffee (a mom’s nap in cup!). Thanks Chip & Joanna for your investment in Waco... our family made many special memories! #Waco.

To top off the post, Anna also included a few snaps from the outing, including a curious pic of the group dining at Magnolia Table. What's noteworthy about the snap is that the only man present is Ben Seewald, Jessa Duggar's husband. And when you remove Seewald from the photo, it looks like one big girls trip. In fact, there were eight Duggar women on this trip, including Jim Bob Duggar's sister and mother. So, one has to wonder — why couldn't the Duggar ladies hit up Waco without the guys present? Wouldn't it have been nice for them to relax and catch up without any Duggar men lingering in the background?

Of course, one obvious reason for the guys tagging along is that the Duggar women aren't used to driving long distances by themselves. In fact, I haven't seen one piece of evidence suggesting that any of the Duggar women have driven out of state solo.

Another possibility here is that the ladies wanted some extra sets of eyes to watch the children while they enjoyed stress-free shopping time. Still, if that was the case, why didn't the dads just say home with the kids? Hmm.

Not to mention, the kid theory doesn't really add up when you consider that newly engaged couple Josiah and Lauren Swanson attended the trip together. Since the pair doesn't have any children together, it's reasonable to ask why Swanson couldn't hang out with her future fam alone. One would imagine Swanson might want to get to know her sisters-in-law privately without the influence of Josiah.

Take Jill Duggar's recent trip to Colorado, for instance. Although Jill had no business in Colorado, she packed up her two young kids and headed out there because her husband, Derick Dillard, had work to do in the area with his "church." So, Jill had to come up with activities to keep her kids occupied during this time — including a controversial one hour walk to Chick-fil-A — while Dillard did his thing. Of course, one would think that it would have been easier for Jill to stay home with her babies given that she has a large network of support at home. And unsurprisingly, a few fans have brought this point up.

"Why is she following Derick around it’s so odd," one person commented on an Instagram pic of Jill and her two kids walking around Colorado. "One trip I get but every single one? Poor kids I feel bad for Izzy."

But Jill isn't the only one who "follows" her spouse around the country — Jinger Duggar attends trips with her spouse too. In fact, a pregnant Jinger accompanied Jeremy Vuolo on a trip to Los Angeles in March. "Jinger and I enjoyed a lovely afternoon in the hills of Los Angeles with @revaustintduncan and his beautiful family, Vuolo captioned a shot from the trip, according to Instagram. "And yes, Dodger is such a good boy."

Besides the photographic paper trail, the evidence backing up the theory that spouses can't travel alone is that the Duggars are strongly against divorce. Perhaps the family's line of thinking here is that the couple who travels together stays together. Not to mention, Michelle Duggar makes it a point of saying how Duggar women should always be sexually "available" to their husbands — and this isn't possible with solo trips.

Still, the Duggar women have traveled alone at least once. On an April 2016 episode of Counting On, Joy-Anna, Jinger, Jessa, Jana, and Anna enjoyed a getaway to log cabin (you can watch the clip below) where they chatted about motherhood and other important topics in total privacy. Sounds nice, right?

So, while there is no specific rule stating that the Duggar women can't travel alone, it looks like that this occurrence is a rarity. The likely explanation here is that the Duggars believe married couples should travel together, a view that isn't too shocking when you consider the family's conservative values.