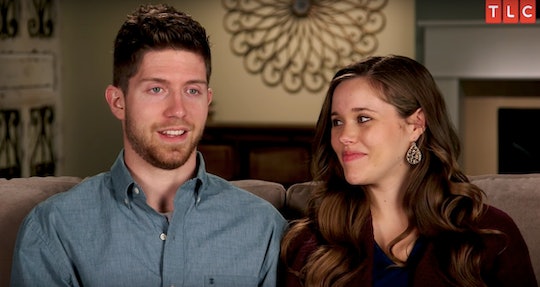 The Duggars Have A Very Strong *Opinion* On Halloween

Now that the oldest Duggar children are all grown up and having children of their own, fans might be wondering if the newest generation will be brought up the same way Michelle and Jim Bob raised their kids. Specifically, this time of year, should we be expecting to see those little cuties in costumes? Don't bet on it, because the Duggars don't do Halloween, and here's why: because the holiday's 2000-year-old roots relate to magic, and as far as they're concerned, magic is real, it's evil, and they're staying far away from it.

Michelle briefly mentioned that the family abstained from celebrating Halloween in a 2011 blog post for TLC:

While we do go to pumpkin patches and corn mazes, we don't do the Halloween thing. From the beginning of our marriage we just kind of felt like we didn't want to celebrate that holiday. But we enjoy the harvest celebration. Our church fellowship has had different celebrations through the years that we've been a part of, ones where the children can play games and receive candy and toys and do all kinds of fun things, like a cake walk.

She goes on to say that the church is a "safe environment" where you don't have to worry about encountering the "things that go on during Halloween."

Like what, trick-or-treating? Staying up late sewing costumes? Carving jack-o-lanterns? It seems as though the Duggars are wholly unfamiliar with modern American Halloween traditions. There's also an anecdote in "Growing Up Duggar," by Jill, Jinger, Jessa, and Jana Duggar, that shows just how little they know about the holiday. On Oct. 31, 1998, the girls were canvassing for their father's Arkansas House of Representatives campaign, going door to door at night, wearing fancy dresses and carrying bags of leaflets. "People were offering us candy and telling us they loved our dresses," the sisters wrote, and they "eventually caught on and suspended our campaign efforts till the next morning." How many houses did it take?

An earlier passage sheds some light on why the girls were raised to be complete ignorant of the holiday most kids wait all year to celebrate:

One specific thing that our parents have always been careful about is magic, which often shows up in children's movies. As harmless as it may seem, it's not a joke in God's eyes. Magic, sorcery, witches, spell-casting and the like are all part of the demonic realm that God wants us to stay away from. No matter how 'good' a film containing magic may seem, God speaks seriously throughout the Bible; it is not something to be glorified or portrayed by any means as something fun or attractive.

That's Jessa (Duggar) Seewald's son, Henry, dressed up as a cow not to go trick-or-treating, but to earn his mom a free sandwich at the very problematic Chick-Fil-A fast food chain. It looked like maybe the second generation of the family had loosened up a bit on the movies when her husband, Ben, posted a review of Thor on their blog... But after praising the "compelling" storyline, he then went on to compare Thor negatively to Jesus, detailing all the ways that the son of God is superior to the son of Odin.

Does the Bible really warn against "portraying" magic? Deuteronomy 18:10-12 says that anyone who "practices divination, or is a soothsayer, augur, or sorcerer, or who casts spells, consults ghosts and spirits, or seeks oracles from the dead" is "an abomination to the LORD," and Leviticus 19:26 and 31 instructs readers not to "recite charms or practice soothsaying" or "turn to ghosts or consult spirits." But what about just dressing up like Wonder Woman and begging neighbors for fun-sized Snickers? Even if trick-or-treating does count as honoring the ancient Celtic gods once worshipped on Oct. 31, Jeremiah 10:5 says another religion's idols are "like a scarecrow in a cucumber field" that can't walk or speak. "Do not fear them, they can do no harm." Sounds to me like there's nothing to worry about, as long as you don't use a Ouija board. But to each their own.

More Like This
Meghan & Harry Celebrated Their Anniversary As A Family Of Four For The First Time
These TV Show's Graduation Episodes Will Tug At Your Heartstrings
When Is National Brother's Day?
Ashley Graham Reveals She Lost “Liters Of Blood” After Twins’ Home Birth