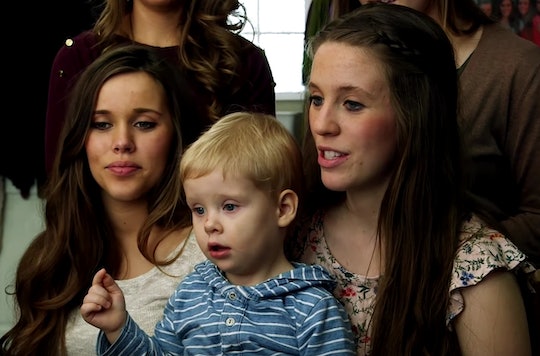 The Duggar family is known for their strict rules and traditions, especially during the holidays. The family makes decisions heavily rooted in their religion and moral beliefs, which is so true to them. So, if people were wondering if the Duggar's celebrate New Year's Eve, they probably already know the answer. And that answer is "not exactly."

The stars of TLC's 19 Kids & Counting and Counting On enjoy the symbolism of a new year just like everyone else, but they don't traditionally celebrate it like most other families. In a 2012 blog post for TLC, mom Michelle Duggar perfectly summed up and detailed the family's plans for New Year's Eve. Like most people, the Duggar family loves to spend their New Year's Eve focusing on "family, friends, and giving thanks for the previous year." They do this by gathering in one home, typically at their massive estate in Springdale, Arkansas or at a friends house, according to Michelle's blog for TLC. But that is where the similarities to a "normal New Year's Eve" party stops. Instead of partying, the family chooses to pray on New Years Eve.

"We usually spend time fellowshipping and playing games and visiting as we get ready for midnight," Michelle wrote.

"About 15 minutes before the New Year is here, we'll start taking turns, going around the room praying and giving thanks. By the time everyone gets a turn, it is already the new year."

But the 19 Duggar siblings (and their spouses and their kids) don't really seem to mind that they celebrate just a bit differently than most. Michelle continued, writing:

It's a very special time for our family — it gives each of us an opportunity to just really open up our hearts and talk about the things that we're thankful for. We always give thanks for the past year and look forward to the New Year. We don't really focus on resolutions in our family.

Last year, the Duggar family reportedly spent New Year's Eve with their friends, the Bates family, according to the Duggar Family Blog. They also ate food, prayed, and played games like Bible Jeopardy and spoon frog. Now that sounds like a pretty fun way to ring in 2018.

But now that the Duggar children are starting families of their own, it is a little unclear if they also practice their family's traditions for New Years Eve. Last year, none of the older Duggar siblings with Instagram accounts detailed how they rang in the New Year — so it's likely that they keep things low key.

When people think about New Year's Eve parties, they think about wearing something flashy, dancing the night away to music, and getting a little tipsy. But the Duggar family members aren't allowed to do any of that. The Duggar women are not only known for their modest dress code, but they don't drink alcohol, listen to music, or dance, either.

In 2014, Michelle told Us Weekly that dancing encourages "sensual" feelings and Duggar daughter Jessa Seewald reportedly told the magazine that "modern day music" promotes sex and drugs which is a no go in the family, according to E! News. And it shouldn't come as a surprise that the family members who are of age don't drink, either.

"We've never intentionally been to a party where we know there's going to be lots of drinking," Jill Duggar told Cosmopolitan in 2014.

Although a lot can change over the course of four years, it doesn't seem like the Duggar family has changed their minds about these things. And while some people find these things vital to a successful New Years Eve party, the Duggars don't need them. Whether they're playing wholesome games or praying positivity into the next year, the Duggar family's New Year's Eve party sounds like a safe, fun gathering for people of all ages. And with a family as expansive as theirs, you can't blame them for wanting to include everyone in on the fun.