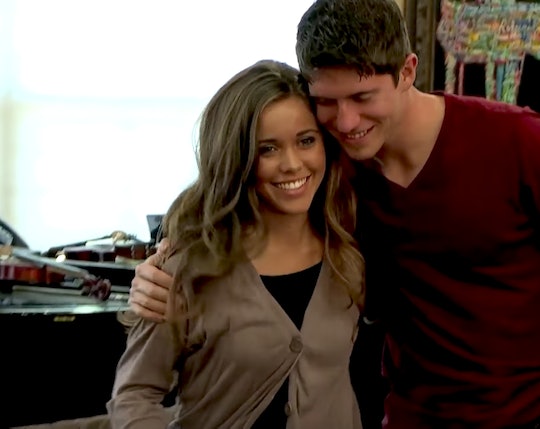 Here's How The Duggars View Their Courtship Rules Vs. Arranged Marriages

Between all of the stars of TLC's 19 Kids and Counting and Counting On, the Duggar family has a lot of kids and a lot of successful marriages. But due to their strict Christian faith and beliefs, the Duggars do things, especially relationships, just a bit differently than most. The Duggars enter courtships before getting married, instead of going on dates. Some might wonder if the Duggars are doing arranged marriages, but a courtship and an arranged marriage are completely different things.

Courting isn't dating, according to TODAY, but it is "dating with a purpose." Duggar family patriarch, Jim Bob Duggar, explained to TODAY in 2014 that the rules of courtship allow for successful bonds to be made, leading to a marriage — which is why there are so many rules attached to courting. Courtships involve heavily chaperoned interactions, limited physical touch, and a lot of supervision, according to TLC. So far, this has led to five successful marriages in the Duggar family.

"A man pursuing a girl's heart definitely needs to the girl's father," Jessa Duggar (now Seewald) explained in a YouTube video from 2014. "So for us, guys would approach our dad and talk to him about that, kind of make their interest known."

Jim Bob only wants the best for his daughters, which is why he fields each boy that approaches them. In an episode of Counting On: The After Show, Vuolo revealed that Jim Bob made him fill out a 50-page questionnaire before he began courting Jinger, according to the Daily Mail. "I think the questionnaire is pretty thorough," Jessa added, revealing that there is different questions and sections to the survey — even one that asks about their finances.

This might seem a bit harsh. But in 2014, Jim Bob responded to critics who accused him of arranging marriages, telling People:

I do not choose who my children marry. Over the years, I have suggested guys to my daughters or we have had a lot of guys that approach us and are interested in this girl, or that girl, but each of our girls have chosen a spouse on their own.

In almost every instance, each boy has known the Duggars for years before entering the courtship. Joy-Anna Duggar's husband, Austin Forsyth, was friends with Joy-Anna for almost 15 years, according to TLC, before he asked Jim Bob to start an official courtship with Joy-Anna. And Jinger Duggar's husband, Jeremy Vuolo, had joined the Duggars on a mission trip and had been friends with Jessa and Ben before expressing his interest in Jinger. Jessa's husband knew her from church before entering their courtship, and Jill Duggar's husband, Derick Dillard had worked with Jim Bob before he set his sights on marrying his daughter, according to TLC. None of these people had been strangers before starting their courtship and marrying.

It's also important to note that courtships don't always work out, either. In 2015, Josiah Duggar was in a courtship but called it quits after four months of seeing each other. Josiah opened up to People about why it ended, saying:

Marjorie and I had a good time together. We were just trying to follow God's lead on everything. She didn't feel it was the right timing then, so we called it quits for a bit.

Jim Bob even admitted to TODAY that not all courtships work — 50 percent will fail. But there is no such thing as a failed courtship to the Duggars. "A parent that loves and cares for their children, they just want the best relationship for their child," Michelle said, according to TODAY. "It's fun to be involved in the whole process in choosing it." There you have it.