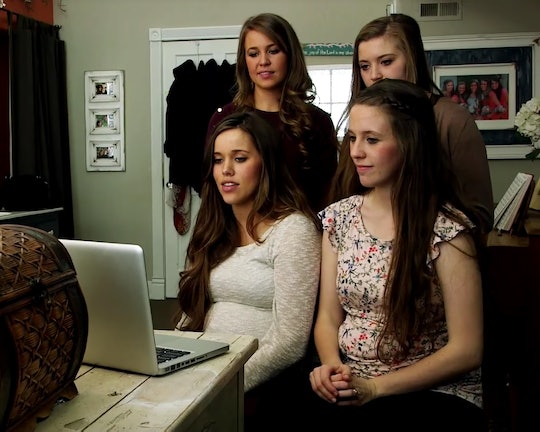 Here's What The Duggars Think About Alcohol

If you're familiar with the Duggar family, then you're well aware that they're a pretty religious bunch. The 19 brothers and sisters, with dad Jim Bob and mom Michelle at the family's core have been raising their children with strong values in front of TV cameras since 2008. And these strong values define them as a family, guiding each person as they live their life. So if you're wondering if the Duggars drink alcohol, you probably know the answer to that already.

The Duggars are incredibly religious people, according to InTouch Weekly, and are practicing Independent Baptists, which is an exclusive form of Christianity. This sect of their religion is known for being particularly conservative, which is why you might see the Duggars choosing to dress modestly and partake in courtships rather than go on dates.

Because the Duggars hold onto their values and morals so tightly, they dictate a lot of the things in their life — including whether or not they drink alcohol. While many people will choose to celebrate this holiday season with a class of champagne in their hands, it is to be assumed that the Duggars will not. This is because, according to E! News, the Duggars do not drink alcohol and booze is seen "as a buzz kill." Not that there is anything wrong with that.

In an interview with Cosmopolitan in 2014, the older Duggar daughters revealed their thoughts on alcohol, telling the magazine that they choose to avoid it, even though they're over 21 years old. Jill told Cosmopolitan:

We've never intentionally been to a party where we know there's going to be a lot of drinking. I've been on the fire department for a few years, and there's people, young people, 18-year-old girls who have died of an OD. You see the effects, and it makes you stop and think about the consequences of some of those actions.

The girls also revealed that they've never purposefully drank alcohol, and when they have accidentally tried it, they found it to be disgusting. In 2015, people thought Jill Duggar and her husband, Derrick Dillard were drinking wine in one Instagram post, according to Inquistr. But it was really just a bottle of non-alcoholic cider.

Their mom, Michelle isn't too keen on drinking herself. In 2009 Michelle Duggar reportedly protested against a local Springdale, Arkansas EZ Mart to stop it from getting a license to sell beer, according to Arkansas news station, 40/29 News. Michelle told 40/29 News at the time that alcohol in convenience stores would "bring children closer to it." Michelle said in an interview at the time, according to 40/29 News:

Personally, I don't think alcohol needs to be convenient. I think it needs to be placed in a place where adults can get to it and they will have a choice to get it. But our children should not be bombarded with that. It's so close to home.

But just because some of the Duggars feel this way doesn't mean that all of the Duggars do. Amy Duggar, Jim Bob's niece and the cousin to all 19 Duggar kids had a full bar with alcohol at her wedding two years ago, according to Entertainment Tonight, so it can be assumed that she does drink. But, according to Entertainment Tonight, there was a non-alcoholic option for the Duggar family members who do not drink.

And just because alcohol may be off limits, other drinks — like sodas — are not. Jill drank soda (specifically Dr. Pepper) while she was pregnant with her first child, Israel, and loved it so much she put it on her baby registry. On previous episodes of 19 Kids & Counting, the older Duggar daughters even talked about how much they love drinking coffee. Jessa Duggar has even talked about how much she and husband, Ben Seewald, love drinking coffee on Instagram.

You can guarantee that the Duggar family won't be drinking a glass of champagne when the clock strikes midnight this upcoming New Year's Eve — but toasting with a coffee or soda, instead.