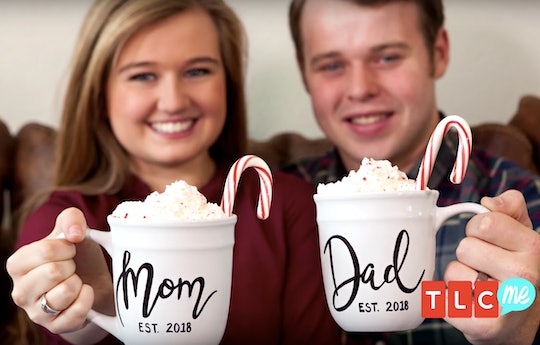 The Duggars Are Big Fans Of Coffee, In Case You Were Wondering

Anyone who is familiar with the super-sized Duggar family knows that there are a lot of rules and regulations that they abide by. This includes, but is not limited to, refraining from alcohol, dancing in a risqué way in public, Halloween costumes, and hugging in a chest-to-chest position before marriage. It all seems pretty restrictive to anyone who doesn't live in a very conservative community like they do, which has likely led many Counting On fans to wonder whether the Duggars drink coffee, because it wouldn't be totally outlandish to assume they don't.

To make a long story short, though the Duggar family has never explicitly said whether coffee is or isn't part of their rule book, it seems that caffeine is definitely very much allowed, given that some of the older kids have expressed their love for coffee beans, while others post "date day" pictures with their spouses featuring yummy lattés and other special coffee beverages.

Most notably, when Jinger Vuolo was getting married to her husband Jeremy back in 2017, she had her family toss coffee beans at her and her new hubby as opposed to rice, or in some cases, flower petals. "I'm definitely a coffee lover," Jinger says in one clip from Counting On, in which she and her sisters are organizing little bags for people to toss at them as the exit the church.

There have been multiple other iconic Duggar moments that involved coffee, too. When Joseph and Kendra Duggar were announcing their first pregnancy, according to Entertainment Tonight, they did so by holding up coffee mugs with whipped cream on top, carefully reading "mom" and "dad" on them.

Other Duggars, like Jessa Seewald, have posted photos of their date nights with their spouses, often involving a coffee stop. In 2017, for instance, Jessa shared in a photo of herself and her hubby holding up to-go coffee cups in the car.

However, the person who loves coffee the most in the family is clearly Jinger. In fact, Jinger's love of coffee is so well-known, In Touch Weekly reported that it was actually an Instagram post featuring a decaf coffee earlier this year that led some fans to speculate that she could be pregnant again, though she shut that down.

In the photo in question, Jinger posted an image of her daughter Felicity pretending to drink out of a Starbucks cup that's clearly marked "decaf," which is what many pregnant women opt to drink, according to Parents.

"'Don’t worry, mom! It’s only decaf,'" Jinger captioned the February photo of her daughter. And more recently, Jinger shared a photo from inside a coffee shop in California and captioned it, "Love the aroma."

While the Duggar family is no stranger to being the center of rumors — especially of the pregnancy variation — it's always endearing and refreshing to see that this ever-expanding famous broods also enjoys something the rest of us find so much reprieve in, which is a hot cup of coffee when you need it most.