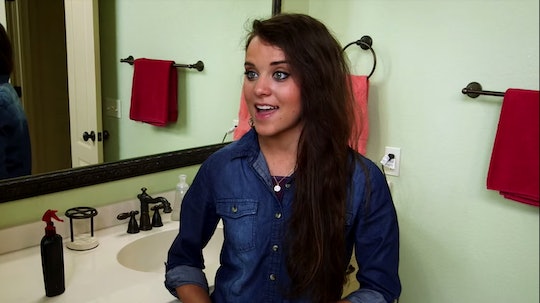 If you were an avid 19 Kids & Counting fan, then you're probably familiar with the Duggar family and their unconventional rules. Because Jim Bob and Michelle — and their 19 children — do things a bit differently than most of us. From chaperoned courtships, to no physical intimacy until marriage, women always wearing skirts and having long hair, and that perplexing no-dancing rule, this ultra-conservative family's policies have definitely raised eyebrows through the years. Given their continued popularity on TLC's Counting On — and in particular, a recent social media update by Jinger — plenty of viewers have probably wondered: Do the Duggars dye their hair?

More Like This
The Bates Family Keeps On Growing: Get To Know All 19 Kids Here
Lisa Kudrow’s Son Used To Say "Mommy!" When He Saw Jennifer Aniston On TV
Everything There Is To Know About The Friends Reunion
Everything You Need To Know About The Proud Family Reboot Coming To Disney+

As People reported, Jinger took to Instagram on Thursday, June 6 to share an update with her followers: The normally brunette reality TV star is now a blonde! Jinger posted two photos of her new look, writing, "Decided to go with the blonde balayage this Summer ☺️." Although there were a few followers who were critical of Jinger's bold new look, the majority of the comments were positive. Many Instagram users pointed out that going blond was fitting for Jinger and Jeremy's upcoming move to California. Others loved it — but were also pretty shocked at the same time.

One person commented, "Wow😍 that’s looks amazing 🤩 is it just me or have we never seen a Duggar dye their hair?"

Another Instagram user wrote "Omg I feel like this is a milestone for the Duggars😱 she looks amazing!"

Yet another person chimed in with, "Wow it looks so different but it's amazing. I'm so pleased you decided it's your hair and your [sic] doing with it exactly as you like 😊."

Honestly, these commenters make some valid points. 1) None of the Duggars have sported such a dramatic color change since they've been on TV. And 2) It makes sense that Jinger would be the one to take that first leap — with her being the rebellious Duggar who wears pants and tank tops.

But alas, on an episode of 19 Kids & Counting, Michelle Duggar got a makeover for her birthday — which included brand new hair. In the clip below, Michelle can be seen getting foils put into her hair, as well as getting a significant amount hair cut off. Color-wise, the end result isn't as dramatic as Jinger's. But it's definitely different than her normally long, curly look. Check it out!

As a general practice, it seems the Duggars tend to keep things natural when it comes to hair color. When it comes to styling, however, long and curly is the way to go. In their book, Growing Up Duggar, the older Duggar sisters explain why they all have long tresses. "Our hairstyle is our choice and we choose longer hair based on our understanding of 1 Corinthians 11:14-15," they wrote. "While it is a shame for a man to have long hair, a woman's hair is her glory."

Not only that, but apparently family patriarch Jim Bob prefers Michelle's hair to be long. "I know Jim Bob likes [my hair] long and I am trying to impress him — what he likes is what I want," she told People in 2012.

If you delve even further into the Duggars' hair preferences, you'll also find another hair influence, aside from their interpretation of scripture and what Jim Bob likes: Bill Gothard. He's the preacher behind the Advanced Training Institute, which is a homeschool system the Duggars use for their children, according to In Touch Weekly. He also happens to think women and girls should have long, curly hair. Coincidence? I think not.

So there you have it! Although the Duggar women — while still living at home, that is — typically keep their hair long, curly, and its natural color, it doesn't seem there's any "rule" forbidding them from using hair dye. Michelle has done it, after all. And now Jinger has, too. Hopefully, her new look opens the door for even more hair experimentation in the family. Because honestly, I would love seeing a Duggar woman rocking a short bob!