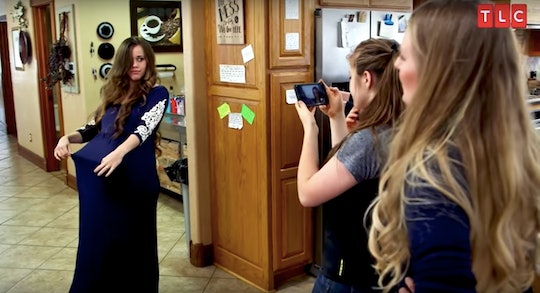 The Duggars Take A Unique Approach To Higher Education

While many might think of the Kardashians as being the first family of reality television, the Duggars are definitely in a league of their own. And questions about whether the Duggars go to college or what exactly their beliefs center on are asked quite regularly. After all, it isn't every day that a family with 19 children who follow some pretty rigid standards and rules go on television. Well, OK, it's pretty much every week, actually. But that doesn't mean that the family tells viewers everything about them, and even after watching them on TLC's Counting On, fans still have quite a few unanswered questions.

As most fans of the show, and it's predecessor, 19 Kids & Counting know, the Duggar parents, Jim Bob and Michelle, made the decision to homeschool their children up until they got their GEDs. Writing for TLC.com, Michelle explained how the family chose to educate their children after seeing another family do the same:

There was just such a closeness between the parents and the children - a real, genuine love and respect for one another. Jim Bob and I thought, "That's what we want. That is the fruit we want to see in our children and that oneness in our family."

But, what do the Duggar children do after homeschooling? Well, each kid is different.

Of course, it makes sense that the Duggar children don't usually go the traditional route when it comes to college. After all, in a family with 19 children, paying the tuition for university in the United States would be a multi-million dollar affair.

As College Board reported back in 2016, the "average total tuition and fee and room and board charges are $20,090," and that's just for in-state public universities, for one year. So obviously, the Duggars are totally entitled to not want to shell out that kind of cash. And college isn't for everyone, either.

In 2012, Michelle wrote that some of her children had been taking online courses through CollegePlus, which she described as "a distance learning program, for the most part, and then you have a coach who will come alongside you and assist you in studying and preparing for your courses."

But, some other Duggar children have taken different approaches to life after homeschooling, getting paid internships or working in a trade of some sort. For example, 19-year-old Joy-Anna Duggar is currently interning at the Arkansas House of Representatives in Little Rock "alongside her 18-year-old brother Jedidiah Duggar," as SheKnows reported.

As Michelle pointed out, some of her children are able to pursue what they want to do in life while avoiding student loans and actually making money or simply gaining real-life experience in the process. Writing on her TLC blog, the matriarch of the family explained:

They're doing their "college" things that they want to do, but a lot of them are getting paid for it. And that's what's great about on-the-job training. They're making money getting trained to do the things that they love.

And that's pretty great. Because as anyone raising a family knows to be true, life and education aren't one-size-fits-all situations. Sometimes, you've got to mix things up to have them work for you and your own family's needs.

The fact that the Duggars don't really go to college in the traditional sense of the word is OK, and they're certainly not the first family to go this route. It works for them, and that's all that matters.

More Like This
Kourtney Kardashian & Travis Barker’s Kids Had Roles In Their Wedding
Cardi B Gave Us An At-Home Fashion Show With Children's Music Playing In The Background
Priyanka Chopra & Nick Jonas Share First Photo Of Baby After Over 100 Days In NICU
Kate Middleton Explains Why Her Kids Couldn't Attend The Top Gun: Maverick Premiere