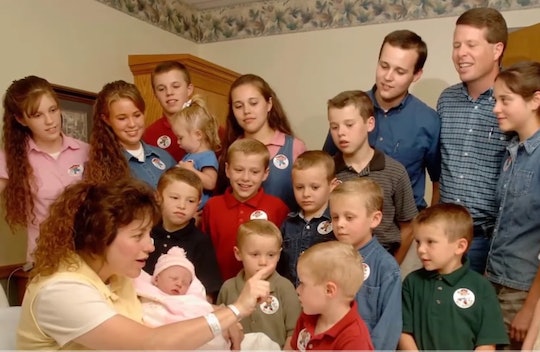 Here's How The Duggars Tackle Health Insurance For Their Huge Family

In the United States, the cost of raising even a single child these days can be astronomical, especially when you take into account unexpected emergencies and growing medical bills — so the thought of raising 20 healthy and happy kids, like the Duggars currently are, would be enough to strike panic into many parents' minds. I mean, how do they afford all of the medical costs involved? Do the Duggars have health insurance?

Fortunately for those worried about the Duggars' financial stability: yes, they definitely do have health insurance. In their book, The Duggars: 20 and Counting!, parents Jim Bob and Michelle Duggar broke down exactly how they keep their family medically insured.

"We have health insurance with a copay for office visits and a relatively high deductible, to keep premiums affordable," the couple wrote in 2008. They explained that they had dental insurance as well, and that the only question asked about their children was whether they had any, with only a "yes" or "no" box to check. They continued:

Some things aren't fully covered, of course. We try to negotiate fees up front whenever the medical provider will do that. We also watch all our medical bills carefully to make sure they're accurate. One time we got a hospital bill after the birth of one of our children that was much higher than we expected. When we requested an itemized bill, we found a line that charged us for 387 bars of soap! We told them, "We're just not that dirty!" The hospital adjusted the bill, and we learned a lesson. Now we always request an itemized bill.

The following year, in 2009, the Duggars answered a few more questions about their health coverage. While on Larry King Live, according to CNN, the Duggars confirmed that they paid under $500 a month for their family's health insurance, with 18 kids in their tribe at that point in time. However, Jim Bob made it clear that they still paid for plenty of health costs out of pocket, including births and kids' braces.

"We have, like, a $2,500 deductible, and then also it doesn't cover maternity," Jim Bob said on the show. He continued:

There's several different things it doesn't cover. ... Dental, it covers about half of the dental costs.

Even with health insurance, though, the medical costs that the Duggars have that aren't fully covered by insurance could be scary with 19 kids in tow. However, that's where having a successful reality TV show might come in handy: according to In Touch Weekly, estimates put the family's earnings for the show at about $25,000 to $40,000 per episode, meaning that the Duggars can probably absorb the extra costs a little more easily than the average family might. The Duggars have also said in the past that they have no debt, according to WREG, and they're famously good at budgeting — so they likely have some savings stashed away in case of emergencies.

In more recent years, the Duggars haven't spoken about their health care costs or what their insurance looks like as often, so it's hard to say if their situation has changed. But with an ongoing TV show (Counting On on TLC) and several siblings getting involved in the family's multiple businesses — they remodel both homes and old cars — it seems like they're staying just as financially savvy as ever.

Health care isn't always easy to navigate, and one would think that it'd be especially scary for a family as big as the Duggars', but so far, it seems like they're doing just fine. And with plenty of new babies being welcomed into the family, that's definitely good news.