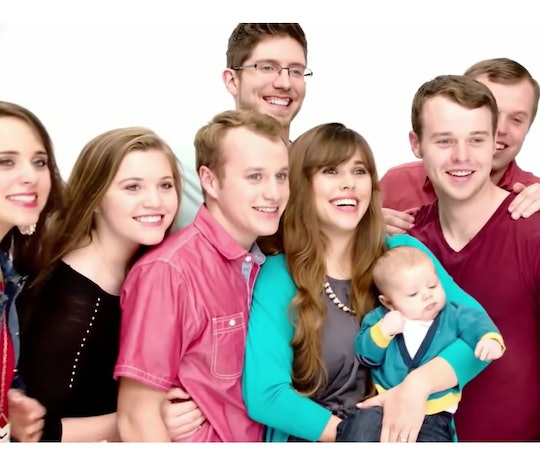 Here's What Every Duggar Family Member Does For A Living

If you've ever watched the Duggars on TLC — whether it was on 19 Kids and Counting or the newer spin-off, Counting On — you've probably noticed Michelle and Jim Bob are pretty well-off. I mean, their house is huge and super nice. Sure, many episodes have focused how the family saves money through grocery shopping at places like Aldi, hitting up thrift stores and abiding by their motto, "Buy used, save the difference." But at this point — after getting paid for appearing on TV for more than a decade — they probably don't need to worry about pinching pennies as much. Still, many viewers probably wonder: Do the Duggars have jobs? What do they do all day? The family did not immediately response to Romper's request for an interview.

Jim Bob Duggar, 52, the conservative Christian family's patriarch, seems to be one of the only members of the family who has a legit and lucrative career, aside from the money he made from TLC. In Touch Weekly reported that Jim Bob is a commercial and residential real estate agent. And when he's not busy running the business, Jim Bob sometimes gets involved in politics by lobbying for Republican candidates.

Although Michelle Duggar doesn't have a job outside of the home, she has managed to raise 19 children — which is no easy feat. (Not to mention, eight of her children are still under age 18!) Michelle also plays a major role in the family's debt-free lifestyle, Today reported, which translates to paying cash for everything, not taking out loans, buying most things used, and making what they can at home.

From there, let's tackle the Duggar children in birth order, shall we? First up is Josh Duggar. Although Josh was the former executive director of the conservative lobbying group Family Research Council (FRC), he was forced to resign in 2015 following his highly publicized molestation scandal, The Washington Post reported at the time. In a Facebook post, Josh released a statement about the reports, saying, "Twelve years ago, as a young teenager I acted inexcusably for which I am extremely sorry and deeply regret. I hurt others, including my family and close friends." He continued:

I confessed this to my parents who took several steps to help me address the situation. We spoke with the authorities where I confessed my wrongdoing and my parents arranged for me and those affected by my actions to receive counseling. I understood that if I continued down this wrong road that I would end up ruining my life. I sought forgiveness from those I had wronged and asked Christ to forgive me and come into my life. I would do anything to go back to those teen years and take different actions. In my life today, I am so very thankful for God’s grace, mercy and redemption.

These days (since TLC dropped him because of the scandal), the oldest Duggar makes ends meet as a used-car salesman, Radar reported. Anna is a stay-at-home mom to the couple's five children.

Next up to bat are the twins, Jana and John David, who are 27 and both unmarried. According to the Duggar Family Blog, John David does construction work and is a Washington County constable. (He also a has a pilot's license.) Jana has frequently been described as a concert pianist. However, many have criticized this title because, although she does play at church, that can hardly be considered a concert pianist. Since Jana still lives at home, she mostly helps care for her younger siblings.

Jill and her husband, Derick Dillard, have been caught up in a lot of controversy in recent months. Before he married Jill, Derick worked as an accountant at Walmart. Then, the couple worked as missionaries in Central America. However, the Dillards were accused of living off donations, so now Derick is currently a full-time student at Cross Church College Ministry, according to the family's blog. As for Jill? She is a stay-at-home mom to their two young sons, Israel and Samuel.

Jessa and her husband Ben Seewald have also faced criticism because Ben reportedly doesn't have a job, according to In Touch Weekly. When Ben and Jessa got married, Ben was finishing up an associate's degree in political science. Through the years, he has worked for Jim Bob's business and performed other odd jobs, according to the publication. (Jessa, as per their religion's strict gender role separation, is a stay-at-home mom to their two young sons, Spurgeon and Henry.) It seems the Seewalds are pretty much living off their TLC paychecks for the time being.

Jinger and her husband Jeremy live in Texas, where Jeremy is a preacher at a small church, In Touch Weekly reported. Before he met Jinger, however, Jeremy was a professional soccer player. As for Jinger, the Duggars have said she works as a wedding photographer, according to the publication.

Joy-Anna and her husband Austin Forsyth were married earlier this year and are expecting their first child. Austin works as a house-flipper, according to People, and Joy-Anna often works with him on these projects.

Joseph Duggar — who married Kendra Caldwell and is now expecting his first child with her — seems to be following in his father's footsteps. Inquisitr reported that Joseph currently works for the family business. He is also working on getting both his real estate license and commercial driver's license (CDL), according to the publication.

Like his older brother, Joseph, Josiah Duggar is reportedly working on getting his real estate license, as well as his pilot license, according to a social media post from 2016, In Touch Weekly reported. And, as for the second set of Duggar twins, Jeremiah and Jedidiah? It's not entirely clear what the 18-year-olds' futures hold at this point, according to the publication.

So there you have it! The Duggars who do work outside of the home are primarily in the real estate business. And those who don't — aside from the one preacher — are housewives, stay-at-home parents, single and ready to mingle, or living solely on TLC paychecks. Hey, if I were a famous reality TV star, you can bet I'd take advantage of that nice source of income, too.