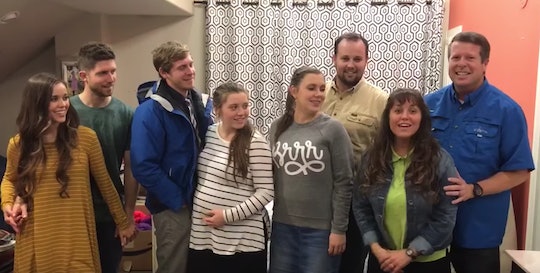 Ever Wonder If The Duggar Kids Have Middle Names? Well, Wonder No More

The Duggar family is full of surprises. The family of 19 kids — who were first introduced to audiences on TLC's 19 Kids and Counting and now star in Counting On — have become people of interest for so many fans based on their traditional and very interesting lifestyle. Because there are so many interesting things about them, it really shouldn't be a surprise that the Duggars have middle names. I mean, how else would they be able to keep track of one another without them?

The Duggar family, led by Michelle and Jim Bob Duggar is famous for having names that all begin with the letter "J" (with the exception of Michelle). In a blog post for TLC in 2012, Michelle revealed that the "J" names happened by accident. Michelle wrote that they named their first child Josh because they liked the name and its meaning in the bible. When it came time to their second children — twins, Jana and John-David — they loved both names. And when it came time to giving birth to their fourth child, Jill, Michelle revealed that she didn't want her to feel left out from her other siblings — thus, the "J" name tradition was born.

But since the Duggars are so deeply rooted in their traditions, they have given all of their children middle names, too. And these middle names don't begin with the same letter. Instead, they add a personal detail and identifier to each Duggar sibling that you might not know about.

But if the Duggar siblings didn't have middle names, that would be OK, too. Of course, nobody is required to have a middle name. Middle names date back to Roman times, according to Reader's Digest, where Romans had three names — their personal name, their family name, and the name that indicated where their family was from. In the middle ages, according to Reader's Digest, middle names were typically named after saints and had religious backgrounds. Now, they're typically used to pay tribute to a deceased family member, a person you'd like to be a role model for your child, or just add some flair to that first name.

While they might not use these middle names on the show or in their everyday lives, knowing that the Duggars have middle names brings fans just one step closer to learning more about them. Not only that but knowing their middle names shows a personal side to the Duggar family that fans might not get to see on TV. Although the meaning behind each middle name is unclear, and that is something that fans would probably love to know, it doesn't matter.

What matters is that the majority of the Duggar siblings have middle names — question, answered.