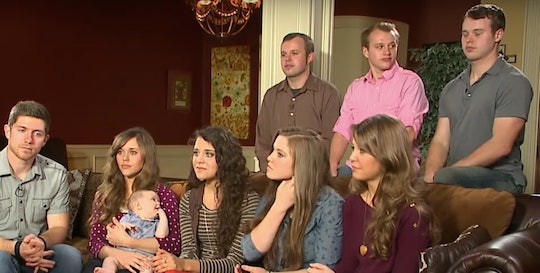 Being able to follow celebrities on social media has allowed fans to become more engaged with their favorite stars. But, not all celebs use every social media platform out there. So, when it comes to one of TV's most conservative families — which has some strict rules for social media — do the Duggars have Snapchat? The TLC family definitely tends to do things differently, but some of their younger children's choices may surprise you.

Technically, the Duggar children are not permitted to even have a social media presence until they're engaged, as AOL.com outlined, so only those Duggar children who are engaged or married could have Snapchat, but that doesn't mean that they do.

Currently only Jill, Jessa, Jinger, Joy-Anna, Josh, and Joseph are eligible to have social media accounts. Some share them with their significant others, while others keep managed their own. And for now, it seems as though the Duggar children's main social media presence is on Instagram, Facebook, or Twitter.

There were some previous reports that Jinger may have her own Snapchat account, but those haven't been verified. Although if you search her name — as well as Josh's, Joseph's, Jessa's — on the app, an account does show up, but it's not clear who the true owner is.

So, it seems as though the Duggars steer clear of Snapchat — or have private accounts and share their usernames with their closest friends — which makes sense considering their fairly modest lifestyles. Even on the social media accounts that they do have, the Duggar children don't really post all that often, nor do they take a lot of selfies or post about their everyday lives like a lot of celebrities do.

Age doesn't really matter to the Duggar family as much as marital status, it seems, as that is the only factor in establishing whether or not a Duggar child can have a social media account.

The two oldest Duggar children, Jana and John-David, 27-year-old twins, aren't engaged or married, and they don't appear to have any form of official social media, while their younger, engaged or married siblings do. And while this may seem extreme to many, it's actually totally in line with the family's belief system. In fact, in Growing Up Duggar — which Jill, Jana, Jessa, and Jinger all wrote — the issue of staying off of social media was brought up. Here's what they have to say, according to that segment:

We realize that social networking can sometimes become an avenue to begin communicating with people we normally would not be in touch with. But we should always be aware of our actions in this regard. Personally, we are very careful not to text, email, or communicate over the Internet with guys on a personal, intimate level. Instead it is wise to keep these interactions businesslike.

Clearly, for the Duggars, being online is something to take seriously, and so it makes sense that they wouldn't have Snapchat, even if they are engaged or married.

However, it doesn't appear that all of the Duggar children abide by the family's social media rules. As In Touch Weekly reported, Josiah Duggar, who is neither married nor engaged, has his own Instagram, and is even verified.

So perhaps, considering the single 21-year-old's social media presence, the Duggar family's rules about social networking are more casual than previously considered. Maybe, the children aren't forced to stay offline until their engaged, but are merely encouraged to do so.

Whatever the case is, it certainly doesn't seem as if any of the Duggars have Snapchat, unless they have their accounts set as ultra-private, which would be totally understandable. After all, it wasn't that long ago when Derick Dillard, husband to Jill, was in the middle of a huge controversy surrounding his seemingly transphobic tweets.

Despite not being readily accessible on this social media platform, fans already get a pretty good glimpse into their everyday lives with their TLC series, Counting On. And, really, that should be plenty.