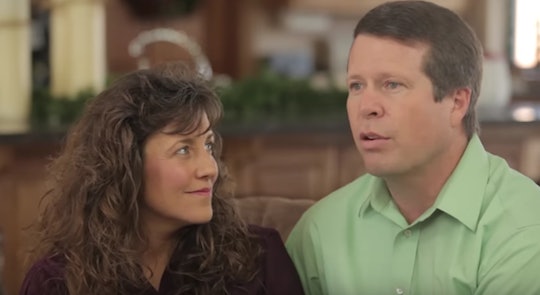 Here's Why The Duggars Don't Have A TV

Ever since the Duggars first appeared on television in 2008, fans have had a lot of questions about the large family. The curiosity can be explained by the fact that the Duggars lead very unique lives, and because Michelle and Jim Bob Duggar seem to make up a lot of rules as they go. Michelle and Jim Bob have created their own little universe of sorts, and fans want to know everything about their day-to-day lives, including the most mundane details, like whether the Duggars have TV. As one might expect, the Duggar's outlook on television reflects their ultra-conservative values.

If you want to understand the thought process behind Michelle and Jim Bob's thinking, you have to look at their lives pre-kids. Before Michelle and Jim Bob had children, they led fairly liberal lives. The couple kissed before marriage, Michelle wore whatever she wanted, and the two even used birth control, according to The Inquisitr. After the miscarriage of Michelle and Jim Bob's first child, however, they became very conservative and religious. Jim Bob and Michelle attributed the miscarriage to birth control, and since that heartbreaking life event, every decision they make is rooted in faith and their conservative ideas.

And it goes without saying that the Duggars are very deliberate with the choices they make. That's not to say that other people are just impulsively making decisions left and right, of course. I just mean to say that the Duggars see every choice, no matter how small, as an opportunity to get closer to God. At least that's what I've gleaned from their interviews.

Interestingly enough, Michelle and Jim Bob did own a TV for a brief period of time before they had kids, although they gave that up because is ruined their "communications." Jim Bob explained to HuffPost:

I grew up watching TV, but when we got married a doctor friend of ours encouraged us not to have a pet or a TV the first year of marriage. So we did that. For the first year we lived on love. And after that someone gave us a TV and for the first three weeks we were both glued to it. Communications dropped off, we weren’t talking as much and we couldn’t believe the content on TV we didn’t think was appropriate. This is detrimental to our marriage. We prayed about it and felt we had to pull it out of our house, which we did. And I would say that is one of the best things we have done for our family.

As for the Duggar fam's favorite program, that would be The Andy Griffith Show. But, as it turns out, even Andy Griffith isn't godly enough for Jim Bob. Jim Bob argued, according to Cafe Mom:

The Andy Griffith Show is a very wholesome show, but when a crisis comes up, they leave God out of the equation. They don’t pray to God asking for his help. Usually they solve the problem with deceit or manipulation. It’s really teaching how to live your life without God. Even though we watch those shows, we usually have a discussion afterward about how things should have been done differently.

Of course, it's fair to wonder if the Duggar kids get to watch cable when they're with a less conservative family member or friend. Amy Duggar, a cousin of the Duggars, once addressed that exact issue in response to a fan's question. The fan asked, according to Us Weekly:

I have a question for you. Since your cousin's don't watch t.v., do they ever come over to your house and stay for a night?

Amy replied, according to People:

... we've had a girls night before and have gone out to eat. It's a rule though that if I want to spend quality time with them I have to come see them. They don't want me to influence them. So I respect their standards and I don't fuss about it.

Although I'm not surprised that the Duggar family doesn't watch cable TV, I really want to know if the married kids have their own televisions. Or, if they can't watch cable TV, how is it in line with their religious values to appear on cable television? I suppose that's a mystery for another time.