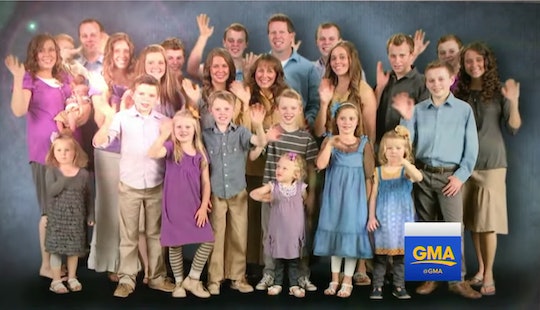 Do The Duggars Spank Their Kids? The Answer May Shock You

The Duggar family is famous not only for the sheer number of children they've produced, but for their ultra-conservative views on things like relationships, clothing, and gender roles. And as it turns out, their philosophy on discipline can be added to this list. Although we never saw Michelle and Jim-Bob so much as raise their voices — let alone physically harm any of their children — on the TLC series 19 Kids and Counting, their methods off-cameras are reportedly different. But do the Duggars spank their kids? The answer may surprise you.

Duggar family matriarch, Michelle, answered this very question from a viewer back in 2010. Although she didn't directly confirm or deny if spanking is used in their home, it seems Jim-Bob and Michelle try to focus on positive behavior in their children. "We've really chosen to focus on praising our kids for good character, for Godly character," Michelle said, according to TLC. "And as we do that, we find that we have a lot less trouble with correction when we are constantly looking for ways to praise them." Michelle continued:

So in training the little guys, day in and day out, if I see the little ones not being kind to each other, I will take them aside and I will deal with them and talk to them and have them work this out amongst themselves and learn to communicate and be kind to each other. And then when I see them being sweet and doing what's right, I make a big deal!

In a video from 2013, Michelle seems to get a little more real about the fact that she isn't a perfect parent. The soft-spoken mother of 19 even confesses she sometimes (gasp!) raises her voice. "I don't always stay calm. And yes, I do lose it at times," Michelle said in the TLC video, adding:

And I think it goes back to years ago, really. I think the lord really broke my heart about my anxiousness and my anger, or whatever you want to call it. I think we all struggle with that, you know, the feelings of frustration and anger building up in us. And how do we handle that?

However, it seems the Duggars may have done more than simply raise their voices at their children. According to The Daily Mail — as inadvertently revealed back in 2016 from Springdale Police Department reports concerning Josh Duggar's molestation of four of his siblings — the Duggars allegedly spank their children with a rod.

According to the report, the investigator in charge of Josh's case asked the children involved about Michelle and Jim Bob's parenting. One of the Duggar kids (whose name was redacted,) was asked if they were spanked. The child reportedly said yes, and when asked what their parents use to spank, the unidentified family member answered, "They have a rod." Romper's request for comment on these spanking allegations was not immediately returned.

Additionally, In Touch Weekly reported that Michelle allegedly uses the controversial blanket training method on her children. This method of corporal punishment comes from the book, To Train Up a Child — Child Training for the 21st Century, written by Michael and Debi Pearl. According to the publication, the book is used as a parenting guide by evangelical Christians to teach obedience.

Two of the Duggar siblings — Jill and her husband Derick Dillard, and Jessa and her husband Ben Seewald — have also come under attack for allegedly using this controversial "training" technique with their children, according to In Touch Weekly.

No matter how many children a family has, discipline is hard. It's definitely not one of the fun parts of parenting, however, most parents would agree there needs to be some sort of repercussion for undesirable behavior. Because the Duggars haven't come out and directly said whether or not they believe in spanking as a punishment, it's difficult to say for sure what goes on when the camera's aren't rolling. And I have a feeling they won't be addressing the subject one way or another anytime soon.