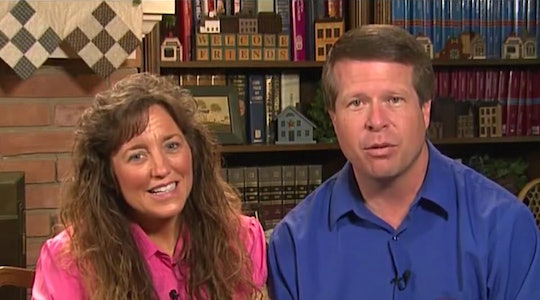 Here's What The Duggars Think Of President Trump

Anyone who is familiar with the Duggars is likely aware of the family's extremely conservative Christian values. On their TLC series 19 Kids & Counting, Michelle and Jim Bob introduced the world to their strict rules: Supporting things like modestly-dressed women, homeschooling courtships, and traditional gender roles — as well as condemning things like birth control, dancing, and women working outside of the home. Via social media, we've also learned what political candidates they've supported through the years. But do the Duggars support Trump? Fans probably won't be surprised by the family's thoughts on our president.

Romper reached out to the Duggar family and did not immediately hear back. It's no secret the Duggars have supported Republican candidates in the past. In fact, Jim Bob was a Republican member of the Arkansas House of Representations from 1999 to 2002, according to the Duggar family's blog. After that, Jim Bob decided to run for Senate and lost that election. In 2012, the Duggars campaigned for Republican presidential candidate Rick Santorum, according to the family's blog. They've also supported Mike Huckabee — who is a family friend, reported HuffPost — as a candidate in the 2008 and 2016 Republican presidential primaries. So it wouldn't be entirely out of the question for the Duggars to be pro-Trump.

In October 2016, Derick Dillard — who is married to Jim Bob and Michelle's daughter, Jill — took to Twitter to encourage his followers to make sure they're election-ready, reported the Daily Mail. “Are you registered to vote?! If not, it’s not too late. No excuses. Get ‘er done so you can vote….and then don’t forget to vote!” he tweeted. In another tweet, he added, “It’s been 8 yrs since I voted in a presidential election from the USA. 4 years ago I voted from >8000 miles away in Nepal. #absenteeballot.” In a reply, one follower asked Dillard who he's supporting, to which the reality star replied, "Trump Pence." Later that month, Dillard defended his position, tweeting, “Voting for Trump doesn’t = condoning his lifestyle. It just means agreeing with more of his policies than Clinton’s." Dillard also criticized Democratic vice presidential candidate Virginia Sen. Tim Kaine via Twitter.

However, another Duggar family member has expressed mixed feelings about the 2016 presidential candidates. Ben Seewald — who is married to Jim Bob and Michelle's daughter, Jessa — seems to be the only member of the family who has publicly criticized Trump, SheKnows reported. "Trump's 2005 remarks about women is 'completely contrary to everything that we believe in as Christians,'" Seewald re-tweeted in October 2016, followed shortly by another tweet. "Evangelicals don’t trust Clinton with SCOTUS or executive orders and Trump with nuclear codes or our wives."

Other Duggar family members never announced who they supported during the 2016 election — at least publicly. After Donald's Trump stunning win, though, Michelle and Jim Bob took to Facebook with their stamp of approval, reported Inquisitr. "Evangelicals played a huge role in Donald Trump becoming our new President this week," the family posted in its official Facebook page. "We all know that we need to see our country turn back to God. As a new president takes office, we need to take advantage of this opportunity to teach our kids about God’s grace on our nation." (It appears the Duggars also used this as an awkward opportunity to promote a free kids' DVD called One Nation Under God.)

Many of the Duggars' Facebook followers were quick to criticize the family's support of Donald Trump.

"What do you mean, 'turn back to God?'" one commenter wrote. "An administration under Trump will NOT teach children to 'turn back to God.' He built his campaign on racism, sexism, and violence. To me, 'grace' is accepting people no matter who they love, loving our neighbors who believe in other gods, a different god, or no god, and treating women with the same respect as men."

Another Facebook user shared, "I have always admired the beautiful and godly way you've raised your children, but I will have to say I am highly disappointed that you support such an indecent man with no morals."

So there we have it. The Duggar family as a whole seems to support Donald Trump's political views, at least. Somehow, they're able to separate Donald Trump the person — who has been accused of sexual assault by no less than 19 women and has a track record for promoting sexism, racism and violence — from Donald Trump's policies. Personally, I can't do the same; the hypocrisy is something I can't began to wrap my mind around. But as a long-time follower of the family and their various TLC shows, I can't say I'm surprised.