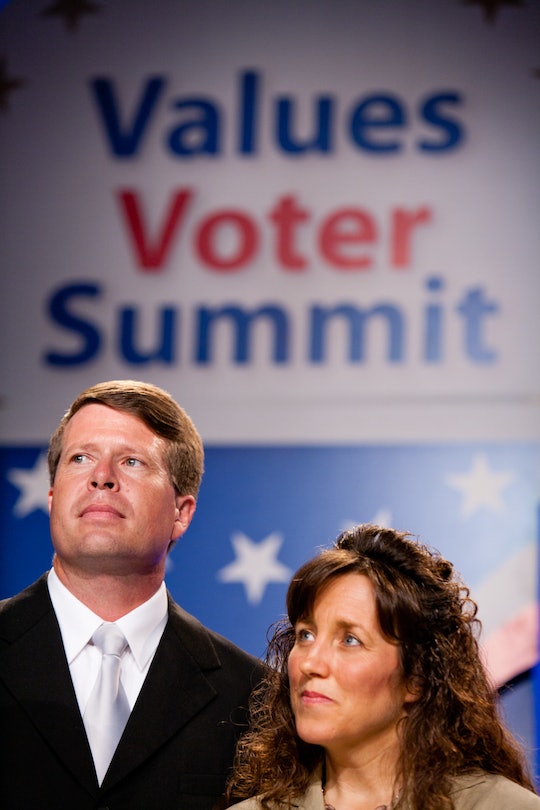 The Duggar Family Is Pretty Active In Politics & Votes Often

With presidential campaign season kicking off (did you catch those wild Democratic debates this week?) the time has come when we all start to wonder a little more about where our best friends stand on the important issues. But what about the celebrities we follow on social media and watch on TV? For instance, the stars of 19 Kids and Counting and Counting On are known for their conservative stance on nearly everything, but do the Duggars vote and are they vocal about their political leanings? This super-sized family is actually one of those reality TV broods who aren't all that shy about their beliefs at the ballot.

People who hold strong idealistic beliefs are generally pretty politically active, and the Duggars are certainly known for their ultra-conservative lifestyle. In fact, their advocacy for the pro-life movement alone took them to Washington, D.C. in March, 2019 to meet with members of Congress, according to OK! Magazine. The family posted about it on their Instagram, writing: "We are having a great time in DC visiting our Senators and Members of Congress with a ministry called Capitol Connections. We appreciate all those that serve trying to make a difference in our great county and those working hard to protect the unborn!"

Abortion and reproductive rights have long been divisive issues in politics, so it's not surprising their post received a slew of negative comments. One such comment read, "Let woman have control over their OWN bodies."

Not only do the Duggars speak with legislators in D.C., but they also wear their voting stickers with pride. In fact, in October 2018, Josiah and Lauren Duggar took to Instagram to show off their early voting stickers.

Also in October 2018, Joy-Anna Duggar showed off her voting sticker and confirmed her party alignment. "We Early voted!! #govote#republican," she captioned the photo.

On Election Day in 2016, the family’s official Facebook page urged people to get out and cast their ballot in the national elections. "Don’t forget to vote today and most importantly let us all continue to pray for our country. In God we place our trust!" the family's Facebook post read.

Given their stance on reproductive rights, how this family votes seems like it would be a no-brainer. The family aligns with the staunchest of Republican platforms, Newsweek reported, and are friends with Republican Arkansas Gov. Mike Huckabee, according to a post on their Facebook page. Michelle and Jim Bob Duggar mentioned they were at the Value Voters Summit with him in 2014, an organization that says it was founded to “preserve the bedrock values of traditional marriage, religious liberty, sanctity of life, and limited government that make our nation strong.”

And in 2013, the entire family campaigned for three Republican candidates from Virginia, according to the Christian Post. Jim Bob told the publication at the time that the goal of the large family trip was to “motivate the Christian conservatives to get out and vote.” He said, "There's a sleeping giant which is the Christian Conservatives…I think they'll win this thing," suggesting he thought their votes could push the midterm elections to the right.

The Duggar family has some experience with campaigning since Jim Bob himself was a member of the Arkansas Hour of Representatives between 1998 and 2002, according to BuzzFeed News. He tried to run for the U.S. Senate as the Republican candidate in 2002, but his campaign did not succeed.

All that conservative activism doesn’t mean that every member of the family is always going to align with Michelle and Jim Bob’s viewpoints. Though many of the kids and their spouses are likely also Republican, one in particular has made statements to the contrary.

Ben Seewald, Jessa’s husband, took to Twitter in August 2017 to casually point out that he doesn’t identify as a member of either party. He wrote at the time, "I voted--Just not for Trump or Hillary. I'm just saying I don't choose to identify myself with either of those parties first and foremost." He’s also spoken out in support of Black Lives Matter and the Take a Knee movement in the NFL.

The great thing about Democracy is that we're free to make our own choices and cast our ballots. This upcoming presidential election is likely going to be messy and it will be interesting to see how celebrities, like the Duggar family, chime in about the important issues in the months ahead.