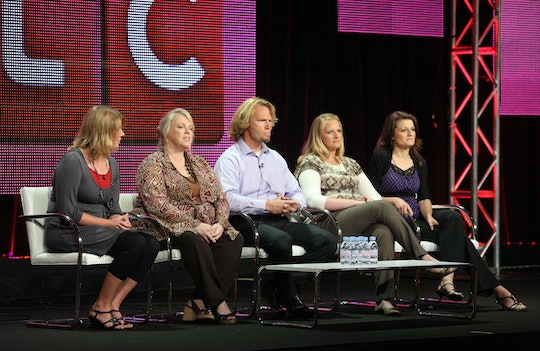 The 'Sister Wives' Living Arrangement In Flagstaff Is Less Than Ideal

Sister Wives barreled into Season 13 this year with yet another move across state lines. So as the Brown family leaves Las Vegas, viewers may be wondering if the Sister Wives have their own houses. They do, but the set-up is a little different from what they had in Las Vegas. There, each Sister Wife had her own home at the end of a cul-de-sac, so the family was never more than a front yard away from one another. It seemed like an ideal arrangement, but the desert heat and proximity to a bustling city was not exactly what the outdoorsy Browns had in mind for their permanent home.

So last summer, they moved to Flagstaff, Arizona, a liberal college mountain town near the Grand Canyon, with snowy winters and a generally chill vibe. In an August interview with the Associated Press, per Page Six, Kody joked, "Let’s just say there’s a lot of hippies in Flagstaff, and they’re awesome."

The family did purchase four adjacent lots, totaling nearly 15 acres, for $820,000 in Flagstaff, but while they plan building their dream home — or possibly multiple homes — they still had to find somewhere to live. So Kody's four wives, Meri, Janelle, Christine, and Robyn, currently live in separate rental homes with their kids, scattered across the city of Flagstaff. The family also rents a commercial space where they shoot parts of the show.

It's proven to be a difficult transition, since the Sister Wives have never lived this far apart from each other before. "We’re just too far apart and I miss everybody," Christine told Us Weekly in January. "It takes more effort to get together."

"We have purchased property," she added, saying, "My biggest hope is that we can just get out there... I can’t wait for that day."

Prior to their 2011 move to Las Vegas, the fundamentalist Mormon family lived in Utah. They hoped that doing the show would raise awareness to change the state's strict anti-bigamy laws — stricter than any other in the country. But an appeals court ruled they couldn't sue the state for violating their religious freedom because they had never been charged.

"Utah is hostile toward polygamists," Kody said in his AP interview. "There is a very natural and subtle discrimination from the public because of those anti-polygamy laws."

While elsewhere in the United States, being legally married to more than one person is against the law, Utah takes it one step further and bans living with more than one "spiritual spouse," which is how Kody defines his second, third, and fourth wives. In a memo addressing the family moving to town, local law enforcement in Flagstaff confirmed that they wouldn't be looking to press charges against the Browns, since Kody is only legally married to his first wife Meri, and is thus,well within the law. Ultimately, their new home seems like a promising place to put down roots, but the process of building a family compound is likely to take awhile.