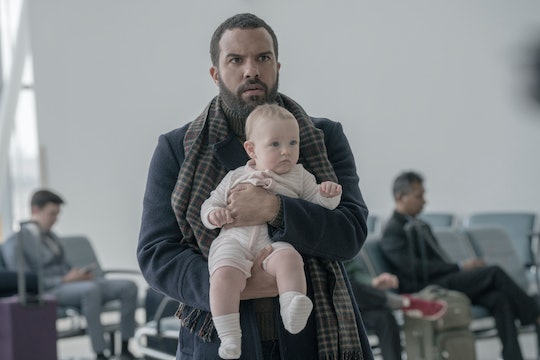 Baby Nichole Might Not Be Safe Yet On 'The Handmaid's Tale'

When June's baby made it over the border to Canada on The Handmaid's Tale, it felt like she was finally safe — until her location was revealed to the Waterfords in "God Bless the Child." Now they know exactly where to find Nichole and who she's staying with. But do the Waterfords get baby Nichole back?

That seems to be the big question of Season 3. Initially, it looked like they might continue with the fiction that she was kidnapped and allow her to stay in Canada. Serena Joy willingly let Nichole go in the Season 2 finale so she could have a better life outside of Gilead. Though Serena was devastated by the loss (Lick it up, Serena! Lick! It! Up!), she appeared to put Nichole's wellbeing above her own desires. Even after learning that Nichole was with June's husband Luke, she didn't immediately try to get the baby back. Instead, in "Unknown Caller," she wanted to have one last meeting to say goodbye — and to put the matter to rest.

But it didn't quite shake out like that. When Serena returned to the arms of her garbage husband Fred after bidding adieu to Nichole, she told him that the whole thing was over. His reply? "It doesn't have to be."

Fred just isn't happy unless he's ruining everything, is he? He really takes it to the next level at the end of "Unknown Caller," with Serena's complete complicity. If anyone thought Serena was going to switch sides, those hopes are dashed now. She's a traitor in every sense. She betrayed her word to June again and again, but now she's going back on what she knows is best for Nichole for utterly selfish reasons. She is fully aware that Gilead is no place for a girl, but apparently it's more important for her to get what she wants.

Fred and Serena film a plea to the rest of the world for the return of Nichole, with June stationed in the back of the frame in a zhuzhed-up handmaid's uniform that's apparently more publicity-friendly. The Waterfords don't have Nichole back yet, but they're obviously going to try their hardest to get custody again.

It's not clear how successful that attempt is going to be, because the audience doesn't know enough about the political relationship between Canada and Gilead. Right now it appears to be tense but cordial, though Canada has no problem giving asylum to those escaping Gilead. It's possible they could do the same for Nichole, since she would be persecuted based on her gender in Gilead.

Plus, the Waterfords only have a claim on Nichole because of Gilead's backwards rules. She is not their biological child. Though Nichole is supposedly Fred's daughter, June believes Nick is her real biological father and a paternity test would presumably confirm that. Luke also knows the truth about Nichole's conception now, so if a custody battle ensues, he could try to use that to his advantage.

This could have the makings of a major international incident. The Handmaid's Tale has mostly focused on the personal aspects of living in a totalitarian regime, but now the story is opening up. The fight for Nichole's custody may reveal more about Gilead's relationship with the rest of the world, though it's the personal stakes that probably have the audience the most worried.